However, most parents aren’t aware of just how dangerous the suits can be for children.

Unfortunately, one father in New Jersey had to find out the hard way just how high the costs can be when things go wrong. 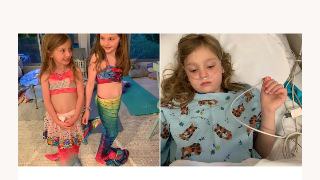 “This is a scary story starring my daughter Annabelle,” wrote father Adam Lisberg on Twitter.

“I’m telling it as a warning about kids, pools, and swimsuits because I don’t want anyone else’s kids to end up in the ER or the ICU like she did for two days.” 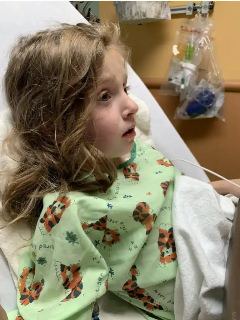 Naturally, they were really excited when their dad bought them matching mermaid swimsuits.

The concept behind mermaid tail swimwear is that both feet are bound together into a long sparkling tail.

It makes a person look like they are a beautiful sea creature! However, that’s also where the problem lies.

If both feet are bound together, it completely changes the way one must swim in order to stay afloat. 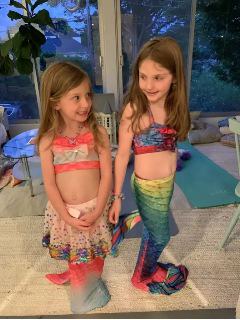 Since Annabelle and Ruby were simply swimming in their little kiddie pool out back though, Lisberg thought it would be safe for his daughters. However, he soon learned just how wrong his assumption was.

“That’s Annabelle stepping out — water was only up to her legs. We know to be careful and we know kids can drown in anything and we know to watch them … and still, things can happen,” warned Lisberg.

The dad was supervising from the kitchen during the day of the disaster. 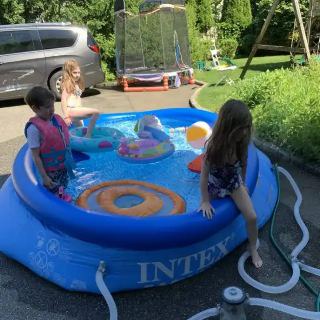 He had the window open so he could hear them playing, and every few minutes he would glance outside to check on them.

Unfortunately, a few minutes was all it took for something tragic to happen.

“Ruby came inside and told me calmly that Annabelle was underwater, and wasn’t moving, so she pulled her out,” wrote Lisberg.

The worried dad immediately ran outside to see what was going on. He was hoping that it was just a prank his daughters were playing on him, but upon going outside, he was greeted with his worst nightmare — Annabelle was lying on the ground unconscious. 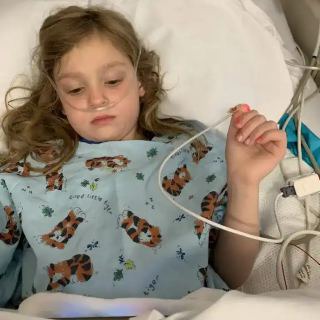 “She was lying exactly like a TV mermaid washed up on the shore. But when I picked her up, her eyes were wide open and she didn’t react,” wrote Lisberg.

He feared she was already dead, but when Lisberg heard the girl cough a little bit, he jumped into action. He flipped her over on his leg and slapped her back. She coughed up some water again, vomited, and began crying. She was still alive!

Soon, the police and ambulance came to take her to the hospital where she spent the next two days in the ICU.

“Even a little water in the lungs, especially if it has chlorine, can spark a delayed reaction as the body fights the injury,” explained Lisberg.

Annabelle had a fever, a high pulse rate, and trouble breathing afterward. They had to give her supplemental oxygen to keep her stable, but luckily, in the end, all was well.

She made a full recovery and was released back into her father’s care.

Although she was a bit shaken up, things could have easily gone much worse.

It was quick thinking by Annabelle’s sister Ruby that ultimately saved her life. 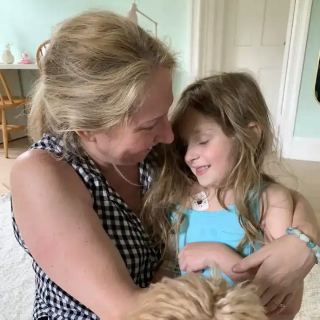 “Ruby said Annabelle pulled that mermaid tail up to her shoulders and tucked her arms inside. And as Annabelle told us later, she tried to “play potato” (?!?) by lying down in the water,” wrote Lisberg.

Once submerged in the water, Annabelle wasn’t able to remove her hands to push herself up. She tried to talk, but the words turned into bubbles.

Ruby then grabbed her and pulled her out of the water. No more than thirty seconds passed before she was rescued. If she had been underwater any longer, she would have most certainly drowned.

The dad shared the story in hopes that no other family ever has to go through something similar. He reminded parents that when kids are swimming, there is always risk involved, no matter how shallow the water.

As far as mermaid tails go, they should be totally avoided. No matter how cool they might look, they simply aren’t worth the risk.