This Is What Happens When You Keep Victimising Your Husband (Fiction)

By Pengician (self media writer) | 2 years ago

"Papa Chichi, where are you coming from by this time of the night?" Iya Chichi asked furiously. Papa Chichi seems not to be ready for any conversation as he staggered into his room half-drunk, ignoring the wife's question but it's not Iya Chichi's nature to give up that way so she followed him from behind, hurling insults at him. "Shameless man! Ashawo! Useless!" She kept shouting, tying and untying her wrapper at intervals. The man didn't say a word, he undressed, threw his tie on one side of the bed and dozed off. 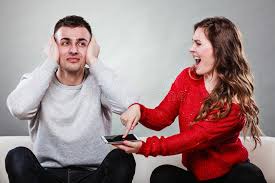 Iya Chichi is a very jealous wife, her insecurity level is grade one. She would eavesdrop on her husband's conversation, take up his phone at night when he's fast asleep to go through his WhatsApp conversation, ask him about the lady he gave a lift in his car. She has at one time pestered him to sack his curvy secretary because according to her, she's a threat to their marriage. She gave her husband no breathing space. Every evening while returning from office, Papa Chichi would park at a famous bar, drink himself to stupor, and return home very late so as to avoid his wife's wrath but he would still meet her awake, like a wounded lion ready to pounce. One Saturday morning, Mama Chichi received a call from one of her supposed informats, the caller said she had just seen Papa Chichi walk into a hotel room with a young lady, his arm around her waist. Papa Chichi had left home on the excuse that he has an appointment with the Managing Director of the company where he works. She hurriedly tied her wrapper and rushed down to the hotel. Unfortunately, she had an accident on the road that claimed her life. Content created and supplied by: Pengician (via Opera News )