Arotile: See Other Young Nigerians Who Died While Blooming

By Truemedianews (self media writer) | 2 years ago It is a very sad thing for parents to bury their own children, no parent ever prayed or imagined such development in their lives, especially when such Children are glorious sharp, such as Tolulope Arotile who has made her family proud globally.

Many young Nigerians with glorious and brighter future have died while they were blossoming, this has caused sudden termination of their God's given talents with which they have been made known all over the world. Three of these glorious Young Nigerians are: 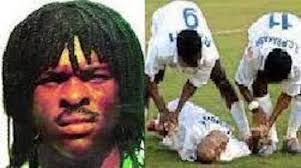 Samuel Okparaji was a Nigerian Footballer who played for the National team of Nigeria in the 80s, he was a trained lawyer, he had a master degree in international law from the Pontifical Lateran University of Roma, he was a big star in the world of football, until his sudden death in 1989.

Samuel Okparaji was born on the 19th May 1964, he joined the Green Eagle of Nigeria in 1988 and had 8 appearances for the team with 1 goal before he died.

He slumped and died at the age of 25, during a world cup qualifiers match between Nigeria and Angola on 12 August 1989, when his stars were beginning to shine. If Okparaji did not die he would have won the African best Footballer of the year's award in his time, he was a great dribbler. His mother passed away on the 23rd of May 2020. 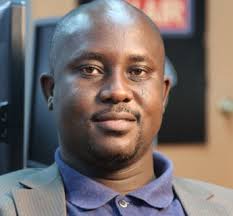 Professor Pius Adesanmi was a Nigerian Professor of Africa Literature and Literary Study who became a renowned writer as a result of his satiric writing, especially on Nigerian and African politics as a whole.

Until his death, he was a professor of Africa Literature and Literary Studies and the director of the Institute of African Studies, Carleton University, Ottawa, Canada. He died on the 10th of March 2019, in Ethiopia, when Ethiopian Airline flight 302 crashed, a few minutes after take-off, he was on his way to the African Union Conference in Nairobi, Kenya.

Adesanmi was a sharp academic, who died prematurely, his death has caused a great vacuum in the literary world. 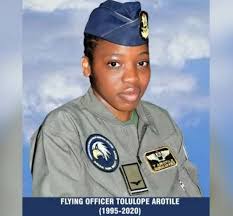 The death of Tolulope Arotile, who was the first female combatant helicopter pilot in Nigerian Airforce was a great loss to Nigeria, her family, and the Nigerian Air Force. Incidentally, Tolulope Arotile hailed from the same state with Professor Pius Adesanmi, which is Kogi State.

Tolulope who was born in 1995 attended Airforce primary school Kaduna 2000-2005 and Air Force Secondary School Kaduna 2006-2011. She was admitted into the Nigerian Defence Academic in September 2012 as a member of the 64 regular courses, where she studied Mathematics and graduated in 2017 as a flight officer.

Tolulope attended international courses and she was winged as the first female combatant helicopter pilot in Nigeria, she was part of the successes recorded against the banditry in the Northcentral Nigeria.

She died on the 14th of July 2020 at the age of 24 after she sustained a head injury in a motor accident allegedly caused by her old classmate who was reversing to greet her. No one knows how true the story was, but God knows.

If Toululope Arotile didn't die, she would have risen to the top rank of Chief of the Air Staff one day and probably became the first female Chief of Air Staff of the Nigerian Air Force. She was only 24 years old.

Tolulope Arotile, Pius Adesanmi, and Samuel Okparaji died while their stars began to shine, they spent just a little time in their various fields of interest, even though they made a global impact, their deaths were sudden, premature and painful. A Yoruba adage says "a straight tree doesn't last in the forest" why do glorious people die prematurely?

Some believe in a saying that some people came to this world to trade a fast-track market, "OJA WARA WARA" people in this category usually succeed and prosper within a short period of time and die thereafter.

What do you think about that? Do you believe the same? Can we say these people belong to that category? Share your view in the comment box.