Was Tolulope really killed by her classmate? (Opinion)

By ChimdikeA (self media writer) | 2 years ago Tolulope Arotile was the first-ever and only female combat helicopter pilot in the Nigeria Air Force (NAF). Tolulope contributed immensely in combating operations against the Boko Haram in the North. She died on Tuesday 14 July 2020. According to the Nigeria Air Force (NAF), Arotile died in a freak accident. NAF's report has it that Tolulope was hit by the reversing vehicle of her excited Air Force secondary school classmate while trying to greet her (Tolulope). This report by NAF has led to controversy among some critical thinkers and analysts in and outside the country. The name of Tolulope's friend that hit her was not given in NAF's initial report of Tolulope's death. However, NAF's Director of Public Relations and Information, Ibikunle Daramola later identified Mr Nehemiah Adejoh as the classmate of Tolulope who hit her out of excitement. But how true can that be? Many groups and individuals have found NAF's report unsatisfactory. Among them are the World Yoruba Congress, Afeniferi, Iba Gana Adams and Damilola Adegboye (the elder sister of the deceased) asking the Federal government to carry out a transparent and credible investigation to remove the suspicions around Tolulope's death. 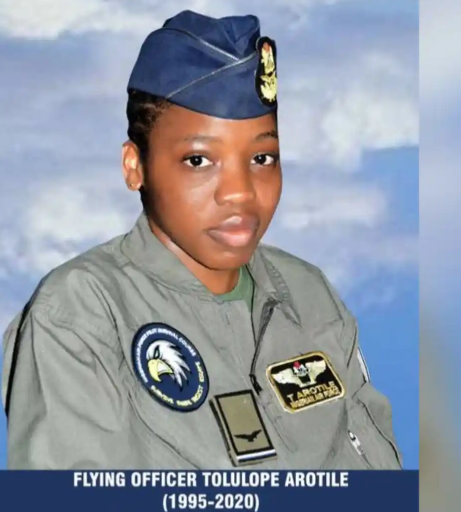 Few others believe the young Combat Pilot who was winged on October 15, 2019 was murdered seeing her credibility in combating operations against the Boko Haram bandits. But how true can that claim be as well? Damilola on her statement on 16 July said

"We in the family are not convinced that Tolu can just die like that in a freak accident. I know that the military is well trained in the art of investigation, we want them to carry out a thorough investigation that can convince us beyond all doubt that the incident that led to her death was real"

Okun Developing Association (an umbrella body of the Yoruba-speaking people of Kogi State) on Sunday 19 July described the official report on the cause of Tolulope's death as fastidious urging that a proper investigation be done. Some have the claim that the official report by NAF was to cover up the truth as regards Tolulope's cause of death. The frequently asked questions are; At what speed was the reversing vehicle? Was the classmate not using the rear view mirrors? Did Tolulope not see the reversing vehicle? among others. Answers to these questions may require critical thinking.

In my view, the NAF's investigative report so far is not satisfactory. It is not transparent and its credibility is below average. I join other individuals and groups asking that a more credible investigation be carried out to ascertain the actual cause of Tolulope's death.

To the reader: I will appreciate having your submission on this issue. Don't forget to share after reading

Content created and supplied by: ChimdikeA (via Opera News )