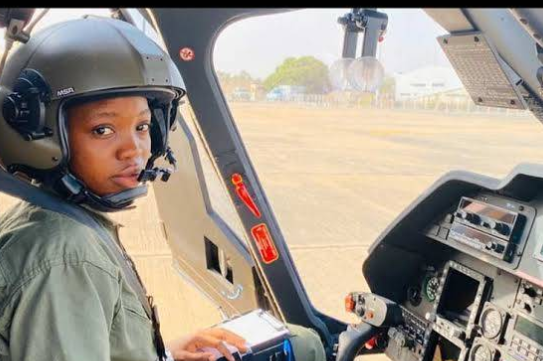 Following the death of The first female combatant helicopter, Flying Officer Tolulope Arotile, the Nigerian Air Force has pledged to conduct an investigation on the cause of her death.

The NAF has therefore stated that the details of the outcome of its preliminary investigation, which is being conducted over the circumstances that led to the death of Arotile Tolulope, will be confirmed tomorrow, Sunday 18th of July.

The country’s first female combat helicopter pilot had been reported to have lost her life on Tuesday due to a head injury she sustained at the naf base station in Kaduna state.

According to the information released by the Air Force, it was stated that her Former classmate "inadvertently hit her" when she was reversing the vehicle during the process of greeting her.

NAF further added that the fellow who was directly the cause of the accident and the fellow occupant who was with her in the vehicle are under detention and currently being investigated.

The burial preparation for Arotile are scheduled for Thursday, 23rs of July, and at the National Military Cemetery, in Abuja, with a full military honours ceremony as a farewell tribute.

The declaration to disclose the details of the investigation was made know by the NAF Director of Public Relations and Information, in person of Air Commodore Ibikunle Daramola, in a statement on Saturday night.

He mentioned that, "The Nigerian Air Force will tomorrow, 19 July 2020, hold a Press Conference to give details on the outcome of its preliminary investigation into the circumstances surrounding the death of Flying Officer Tolulope Arotile which occurred on 14 July 2020."

Thus, the Nigerian Air Force has announced that the details of the outcome of investigations regarding the death of the first female combatant helicopter, Tolulope Arotile, will be disclosed tomorrow.