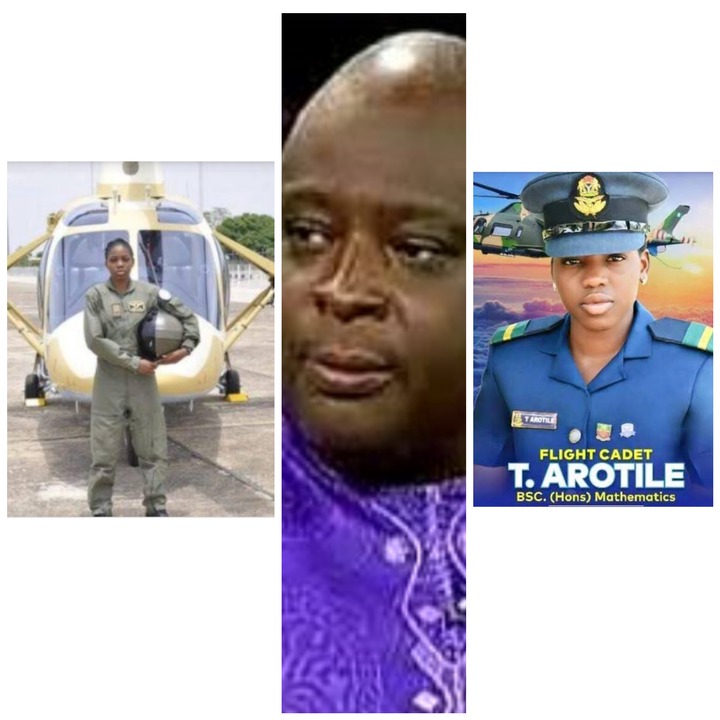 As Nigerians received the news of death of Nigerian first female combatant, NAF pilot Tolulope Arotile who died as a result of an unfortunate circumstance, many Nigerians have continued paying tributes to her.

One of such is the popular TVC journalist, Babajide Otitoju. The Maestro himself did not hide his compassion for the late 24 years old NAF pilot Tolulope Arotile.

It is really painful that she died the way she died. I think for most military men and women they prefer to die in combat than to die through a freak accident because that was a woman who saw some of her own school mates heading to the maami market and then one of them decided to pick her. And then while reversing, the vehicle hit her. Her head struck the ground and she suffered massive haemorrhage. She died as a result of that. She is a Nigerian talent we have lost. She is the first ever Nigerian combat. She is a woman from our country.

Last night, I was just wondering why would a young woman like this die at the pick of her power (at the point where Nigeria needs her the most).

I remember when I was talking about Air Marshal Sodiq as the best we have I specifically made mention of these two, women that they are the product of the current Chief of Air Staff. She has learnt a lot in a controlled capacity. Arotile happened to be like the work of his hand and before now we don't have anything like this.

And for Sodiq to see this person died, it must really be tragic for Chief of Air Staff.

Note: Haemorrhage is a medical word the inability of the blood to clot or non-stopped bleeding of blood as a result of a fatal accident or a severe injury.

See a press release confirming her death below: What can you say concerning the death of Arotile, the first Nigerian female combatant?

May God console her family, the people of Kogi state in particular and Nigeria at large on this irreparable loss.

I say rest in peace Arotile.