Outrage as Dangote truck kills one, injures three in Ogun

A mob on Saturday set burning a Dangote truck for killing one motorcyclist and harming three others. 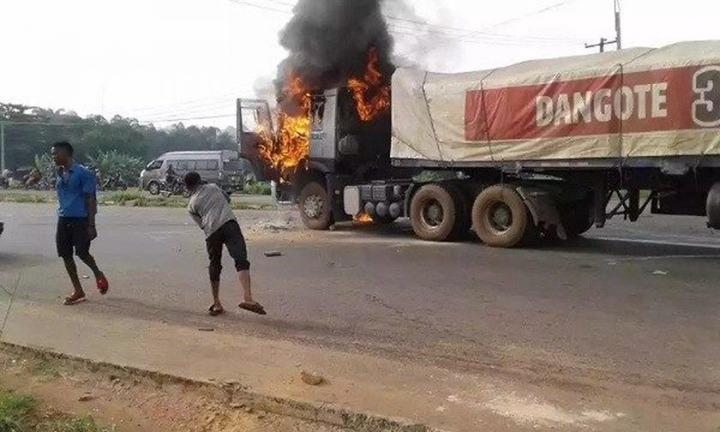 The occurrence occurred around 8 am on the Old Ibadan Roundabout Road, Ago-Iwoye, in the Ijebu-North Local Government Area of Ogun State.

The accident included the truck and a bike, said the Public Relations Officer of the Traffic Compliance and Enforcement Corps, Babatunde Akinbiyi.

Akinbiyi said the truck driver lost control of the vehicle and ran over the moving bike, executing the rider and harming three others.

Goaded by incident, protesters crowded the street and set on fire the truck while the driver was purportedly beaten.

The driver was later saved from the grip of the mob by security agents.

Akinbiyi in an announcement clarified that the Dangote truck driver was originating from Ago-Iwoye inbound Ijebu-Ode when the occurrence occurred.

He stated, "The driver, due to overspeeding, couldn't control the vehicle as it moved toward Ibadan indirect and slammed over a Bajaj bike rider who was attempting to arrange the roundabout then.

He also said "The driver of the Dangote truck was later caught in the wake of causing endeavors to flee to and was beaten to daze by the angry mod that likewise set the truck ablaze. Be that as it may, for the intercession of TRACE, Police, NSCDC, and the FRSC, the driver would have been murdered and the truck would have been totally burnt down.

The driver has been captured and taken to Igbeba Motor Traffic Division, Ijebu-Ode, just as the motor boy. The body of the perished has been deposited at the mortuary of Femtop Hospital, Ijebu-Ode, GRA, he said.

Akinbiyi, who sympathised with the family of the deceased, urged drivers of articulated vehicles to be increasingly mindful when driving, including that they abstain from speeding particularly when moving toward bends areas, corners or roundabouts.

Content created and supplied by: Dambio112 (via Opera News )