Life in Lagos: how can we move about in this partial lockdown without motorcycle and tricycle?

Many who live in Lagos, the commercial capital of Nigeria are used to motorcycle and tricycle to go about their daily lives. There are over 21 million people living in Lagos, according to National Population Commission of Nigeria.

According to governor Sanwo-Olu

Who claims that the July rain is delaying work to fix Lagos traffic.

The Lagos state government placed a ban on 'Okada,' and 'Keke' not to operate on express road and any busy major roads in the state due to the incessant accident and loss of lives recorded from reckless driving of the riders, according to records, the General Hospitals alone recorded over 10,000 accidents from Okada and Keke. Lagos, the Nigeria's major business center, is experiencing heavy traffic jam every day and this affects work, business and other activities in the state. Below are other quick and easy ways to move around in Lagos:

Shuttle in Lagos estates is not a new system of transport. It has always been a means of transportation to areas where the community do not allow Okada or Keke even before the government's ban. And as it stands, shuttles could extend to other areas.

The long seated bus has terminals in bus stops across Lagos to convey people from the bus terminals to their destination. 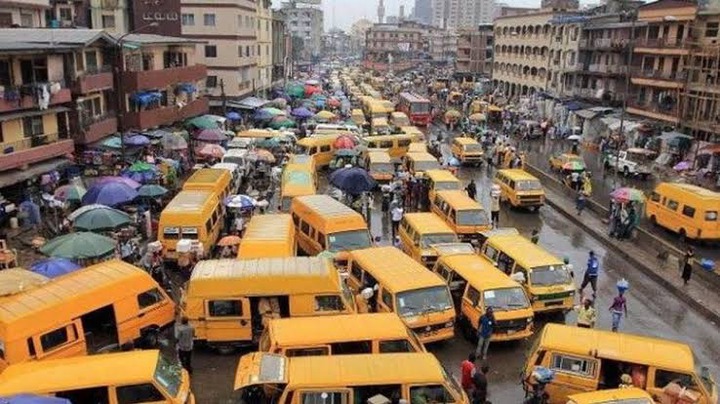 The popular yellow bus widely known as 'Danfo' is another sharp and quick means of transportation in Lagos. Some queue in bus stops to carry passenger and some roam the road in order to pick some passengers who might be far from the bus stop.

The Yellow taxi is almost becoming less popular since the advent of Uber, Taxify, and other car hailing srrvices in the economic hub. But as it stands, the demand for taxi could become high as it stands as other way to survive no-okada lagos. For over five(5) years, the Taxi hailing apps has become the trend for people whenever they have to move around within the state, tge app has no limit as it saves people who wants to go to work or run errands to places where buses in Lagos could not reach within the area where Okada and Keke had been banned from operating.

Apart from Uber, Ocar and Bolt, there are at least ten(10) other taxi hailing apps that operates around Lagos. This appears to be the first time any transportation company would launch a boat ride in the continent of Africa and could be used by anybody.