Opinion: What NAF is not telling us about the Death of female combat pilot 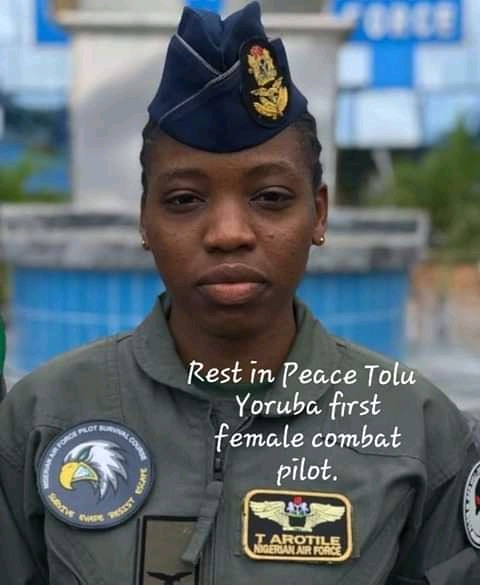 The Death of Tolulope Arotile the first Nigerian female combat Helicopter pilot came as a rude shock to her family and many Nigerians. The manner by which her Death was announced has generated mixed reactions among eminent personalities has made calls to the Nigeria Air force to conduct a thorough investigation leading to her Death.

Many are of the opinion that Tolu's Death is shrouded in mystery as her family are yet to come to terms that such a promising young lady should be cut down at her prime.

Just yesterday, the late sister of the flying officer, Damilola Adebayo said she suspected a foul play in circumstances surrounding her junior sister's Demise. She revealed that a senior officer called her when they were together and that she was the one that dropped her off when she was reluctant to go and to her dismay her Death was announced few hours later. She described the reported accident as a " freaky one "

Corroborating her belief, the Aare Ona kakanfo of Yoruba land Chief Gani Adams has rejected the explanations of the NAF. The OPC leader quarried the NAF over the manner by which the officer died citing their report as flimsy and shabby.

He has called on the Military to carry out explicit investigation leading to the gallant officers Death. Tolu is the only female combat pilot who has been fighting Boko Haram terrorists. The NAF needs to answer the following questions;

Who was the officer that called the young lady even when she was practically not on Duty? Why is the NAF hiding the identity of the supposed ex- classmate of Tolulope who was so excited that he or she has to reverse at a full speed enough to knock her down. I mean what is the ex- classmate name?

Is the ex- classmate an officer too? As a trained personnel what is the distance of Arotile to the car that she could not jump from the path of the reversing car? The profile of the Driver of the vehicle that knocked her down should be made public. The time, place in fact, every details of the ex- classmate should be in black and white to exonerate the military from any suspicion of complicity.

Most importantly was she taken for Emergency treatment after the accident before she was confirmed Dead?

These questions should be tabled before the NAF and Nigerians deserves to know how their heroine died.

With the recent resignation of about 365 Army personnel's citing low morale and loss of interest, it is easy to suggest that all is not well in the Nigeria Military.

Now that there is a mystery surrounding the Death of officer Tolulope Arotile, the NAF must come out clean to clear doubts that the flying officer's death is an accident and not a a case of murder.