An angry mob on Saturday, set ablaze a truck belonging to Dangote Cement Group of Company for killing one motorcyclist and injured three others .

The incident happened around 8:am on the old Ibadan roundabout road ,Ago-Iwoye, in the Ijebu-North Local Government Area of Ogun state .

The accident involved one Dangote truck and a motorcycle .

The Public Relations Officer of the Traffic Compliance and Enforcement Corps, Babatunde Akinbiyi confirmed the incident .

Akinbiyi said the accident occured as a result of  speeding on the part of the driver of the truck .

He said the truck driver lost control and ran over a moving motorcycle, killing the rider and injured three others .

Irked by the incident , an angry mob thronged the road and set ablaze the truck while the driver was reportedly beaten to stupor .

The driver was later rescued from the angry mob by men of TRACE , Nigeria Security and Civil Defence, Federal Road Safety Corps and Police.

Akinbiyi in a statement explained that the Dangote truck driver was coming from Ago-Iwoye inbound Ijebu-Ode, when the incident happened. 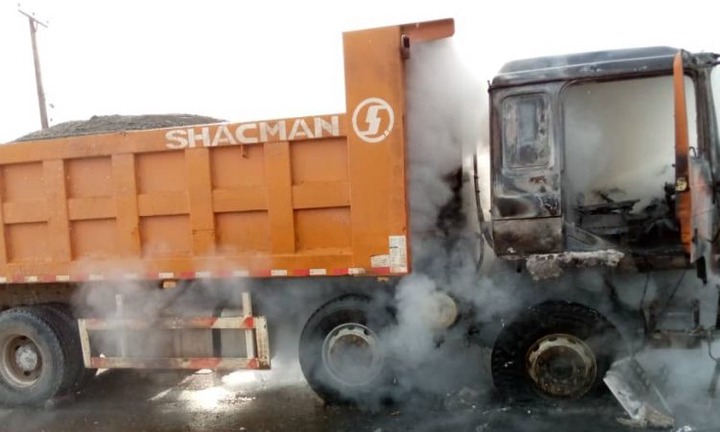 He said " the driver, due to overspeeding, could not control the vehicle as it approached Ibadan roundabout and rammed  over a Bajaj motorcycle rider who was trying to negotiate the roundabout at that time.

"The driver of the Dangote truck was later apprehended after making attempts to run away and was beaten to stupor by the angry mob which also set the truck on fire.

"The driver has been arrested and taken to Igbeba Motor Traffic Division, Ijebu-Ode, as well as the motor boy.

"The body of the deceased has been deposited at the mortuary of Femtop Hospital, Ijebu-Ode, GRA."

Akinbiyi however said while TRACE sympathises  with the family of the deceased, it urges drivers of articulated vehicles to be more responsible when driving.

He urged them to maintain their vehicles properly and avoid speeding especially when approaching bend, corner or roundabout .