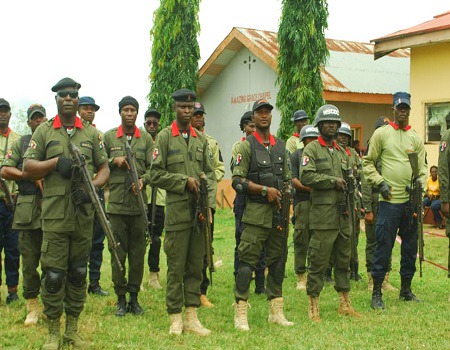 In a national broadcast to commemorate the 2020 Democracy Day on Friday, the president reiterated his administration’s commitment to diversifying the economy, noting that agriculture remains “the key” to this strategy.

The Agro Rangers is a special unit set up within the Nigeria Security and Civil Defence Corps (NSCDC), called the Agro-Rangers, to primarily protect investments in the agricultural sector and farmers-herders clashes across the country.

Agro Rangers is the cynosures of all eyes and the brain-child of the federal government in the reduction of herdsmen and farmers conflicts in the country.

The 5,000 Agro-Rangers deployed to protect farmers and their investments from incessant attacks by bandits/criminals, including providing security to investments in the agricultural sector for both domestic and international businesses; provide physical security to the proposed 250 cattle ranches by the Federal Government.

After it was agreed that a special security outfit for agro protection is provided by the NSCDC, the Commandant General of the Corps Abdullahi Gana Muhammadu created a special unit called Agro Rangers unit with an Assistant-Commandant as the head. Officers were further screened and sent for special training for the task. State commands of the corps were asked to replicate same for posting. Over 5000 personnel were trained and posted for the task.

efforts to curtail it, crippling many facets of the economy as it passes the first 100 days of… Read full story

Senate Threatens To Issue Warrant Of Arrest On Heads Of MDAs
The Senate has threatened to issue warrants of arrest on some ministries department and agencies of government over failure to appear before it and respond to queries by the Auditor General of the Federation. Tribune Online reports that the threat follows the refusal of the agencies of government to honour the invitation of… Read full story

June 12: A Milestone For Democracy – Tinubu
The election of June 12th 1993 changed Nigeria profoundly. That it would have this deep and positive effect was not always certain. Many people laboured, struggled and sacrificed for democracy. They fought not that we would have democracy day but that Nigeria might exist as a democracy every day. When I say democracy… Read full story

EDITORIAL: Defence Minister’s Lamentation
THE Minister of Defence, Bashir Magashi, has lamented that Nigeria’s military is too understaffed and underfunded to tackle the various security challenges facing the country. He made this lamentation while briefing journalists after a Federal Executive Council (FEC) meeting where he said he had made a presentation on… Read full story