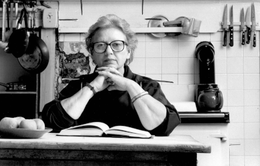 Jane Grigson (born Heather Mabel Jane McIntire; 13 March 1928 – 12 March 1990) was an English cookery writer. In the latter part of the 20th century she was the author of the food column for The Observer and wrote numerous books about European cuisines and traditional British dishes. Her work proved influential in promoting British food.

Born in Gloucestershire, Grigson was raised in Sunderland, North East England before studying at Newnham College, Cambridge. In 1953 she became an editorial assistant at the publishing company Rainbird, McLean, where she was the research assistant for the poet and writer Geoffrey Grigson. They soon began a relationship which lasted until his death in 1985; they had one daughter, Sophie. Jane worked as a translator of Italian works, and co-wrote books with her husband before writing Charcuterie and French Pork Cookery in 1967. The book was well received and, on its strength, Grigson gained her position at The Observer after a recommendation by the food writer Elizabeth David.

Grigson continued to write for The Observer until 1990; she also wrote works that focused mainly on British food—such as Good Things (1971), English Food (1974), Food With the Famous (1979) and The Observer Guide to British Cookery (1984)—or on key ingredients—such as Fish Cookery (1973), The Mushroom Feast (1975), Jane Grigson's Vegetable Book (1978), Jane Grigson's Fruit Book (1982) and Exotic Fruits and Vegetables (1986). She was awarded the John Florio Prize for Italian translation in 1966, and her food books won three Glenfiddich Food and Drink Awards and two André Simon Memorial Prizes.

Grigson was active in political lobbying, campaigning against battery farming and for animal welfare, food provenance and smallholders; in 1988 she took John MacGregor, then the Minister of Agriculture, Fisheries and Food, to task after salmonella was found in British eggs. Her writing put food into its social and historical context with a range of sources that includes poetry, novels and the cookery writers of the Industrial Revolution era, including Hannah Glasse, Elizabeth Raffald, Maria Rundell and Eliza Acton. Through her writing she changed the eating habits of the British, making many forgotten dishes popular once again.

Content created and supplied by: Edinson20 (via Opera News )