By Aishausman (self media writer) | 3 years ago 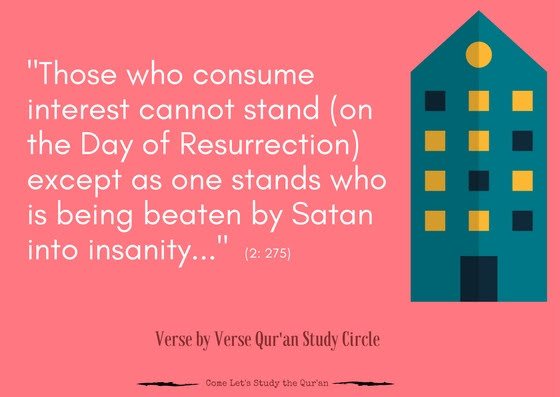 After Allah subhanahu wa ta’ala mentioned the righteous believers who give charity, pay Zakah and spend on their relatives and families at various times and conditions, He then mentioned those who deal in usury and illegally acquire people’s money, using various evil methods and wicked ways.

Al-Bukhari recorded that Samurah ibn Jundub said in the long hadeeth about the dream that the Prophet salAllahu ‘alayhi wa sallam had, “We reached a river – the narrator said, ‘I thought he said that the river was as red as blood’ – and found that a man was swimming in the river, and on its bank there was another man standing with a large collection of stones next to him. The man in the river would swim, then come to the man who had collected the stones and open his mouth, and the other man would throw a stone in his mouth.”

The explanation of this dream was that the person in the river was one who consumed Riba.

“That is because they say, ‘Trade is (just) like interest.’ But Allah has permitted trade and forbidden interest.” Instead of accepting Allah’s commandments that interest is forbidden they come up with excuses. You lend your money and make profit on top of that. They say this because they have lost their mind. They don’t know what they are saying. Allah subhanahu wa ta’ala negates their thinking because He has forbidden Riba and allowed trade. Something that is forbidden cannot be similar to something that is allowed.

On the day, the Prophet salAllahu ‘alayhi wa sallam conquered Makkah, he said,

“All cases of Riba during the time of Jahiliyyah [pre-Islamic period of ignorance] is annulled and under my feet, and the first Riba I annul is the Riba of Al-‘Abbas (Prophet’s uncle).”

We should mention that the Prophet salAllahu ‘alayhi wa sallam did not require the return of the interest that they gained on their Riba during the time of Jahiliyyah. Rather, he pardoned the cases of Riba that occurred in the past, as Allah subhanahu wa ta’ala said, “may have what is past, and his affair rests with Allah.”

Sa`eed ibn Jubayr and As-Suddi said that “past” refers to the Riba one consumed before it was prohibited.

“But whoever returns to (dealing in interest or usury),” meaning deals in Riba after gaining knowledge that Allah subhanahu wa ta’ala prohibited it, then that warrants punishment, and in this case, the proof will have been established against such person. Such people will be the dwellers of the Hellfire where they will live forever. We seek refuge with Allah subhanahu wa ta’ala from the punishment of the fire, the punishment of the grave and an evil end, ameen.

“Whoever does not refrain from Mukhabarah, then let him receive a notice of war from Allah and His Messenger.”

Mukhabarah [sharecropping], farming land in return for some of its produce, was prohibited. Muzabanah, trading fresh dates still on trees with dried dates already on the ground, was prohibited. Muhaqalah, which refers to trading produce not yet harvested, with crops already harvested, was also prohibited. These were prohibited to eradicate the possibility that Riba might be involved, for the quality and equity of such items are only known after they become dry.

The subject of Riba is a difficult subject for many scholars. We should mention that the Leader of the Faithful, ‘Umar ibn Al-Khattab radhiAllahu ‘anhu, said, “I wished that the Messenger of Allah salAllahu ‘alayhi wa sallam had made three matters clearer for us, so that we could refer to his decision: the grandfather (regarding inheriting from his grandchildren), the Kalalah (those who leave neither descendants nor ascendants as heirs) and some types of Riba.” ‘Umar was referring to the types of transactions where it is not clear whether they involve Riba or not. The Shari’ah supports the rule that for any matter that is unlawful, then the means to it are also unlawful, because whatever results in the unlawful is unlawful, in the same way that whenever an obligation will not be complete except with something, then that something is itself an obligation.

“Both lawful and unlawful things are evident, but in between them there are matters that are not clear. So, whoever saves himself from these unclear matters, he saves his religion and his honor. And, whoever indulges in these unclear matters, he will have fallen into the prohibitions, just like a shepherd who grazes (his animals) near a private pasture, at any moment he is liable to enter it.”

“Riba is seventy types, the least of which is equal to one having sexual intercourse with his mother.”

“May Allah curse whoever consumes Riba, whoever pays Riba, the two who are witnesses to it, and the scribe who records it.”