Recently there is a spike in the case of rape and robbery suffered by women in the country.

This is very disheartening and urgent actions needed to be done.

While things should not be left with the women to solve themselves there are a few things they themselves can do to stem the tide of these abuse.

One of these is by taking up a martial arts lesson for self defence. 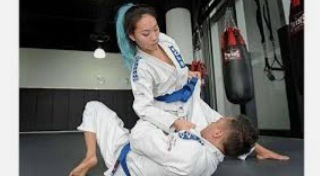 This is exactly what a 22 years old lady and Jiu-Jitsu expert, Sabrina Leite of Manaus, Brazil, did that prevented a young man from robbing her of her phone. Jiu-jitsu is a form of martial arts that emphasises soft art of technique in disarming an opponent rather than attacking them like in Kung-fu and Taekwondo. It is derived from Judo in Brazil.

The unfortunate robbers met their match in Sabrina who was in front of her house when the 2 guys pulled up from a bike. One of the guys, an 18 years old young man jumped off the bike and shouted at Sabrina "give me your phone". Sabrina didn't yield, her defiance scared the young man and he made a run for it. A neighbour who was there ran after the thief.

When Sabrina saw her neighbour ran after the thief she too joined in the chase. After catching up with him she said... 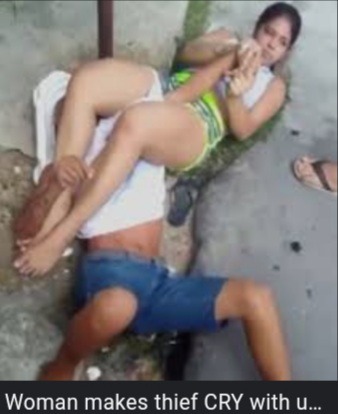 "Then I ran and immobilised him with a sleeper hold, I lay on the ground and put him in an arm lock."

In the video posted online it can be see as the young lady held tight to the man's arm while he cries and tries to free himself. 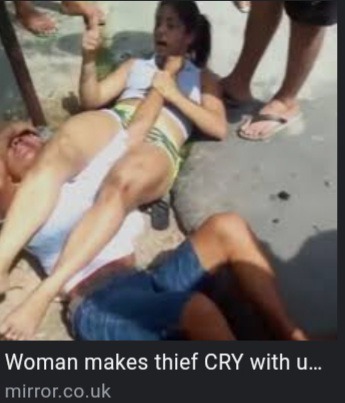 Despite the young man crying heavily for fear that his arm will break, Sabrina kept hold of the arm in wait for the police to come.

Despite her resounding triumph, Sabrina has remained humble about the whole thing and said she was only able to get him in the arm lock because of practice.

Around twenty minutes after holding the guy down, the police showed up and arrested him for attempted robbery. She added: "It's all a question of technique. I have been training for four years, I'm still a white belt. Ranking and belts don't matter to me." Humble and a total kickass - that Jiu-Jitsu training has already paid for itself. Fair play to her.

Apart from Jiu-jitsu other martial art techniques one can adopt for self defence include Judo, Taekwondo, Karate, Kung fu, Aikido etc. For ladies in Nigeria, this is a great lesson. It is not too late to pick up a martial art skill in other to properly defend yourself against rapist, bullies and violent partners.

And for parents, the situation in the country is compelling enough to warrant arming your girl child with a skill for future self defence.

Ladies, over to you, would you prefer to wait for a guy to save you or to defend yourself if you have such skill?

Feel free to drop your opinion in the comments section.