Top five fastest cars in the world for 2020

By Kyovestdavid (self media writer) | 2 years ago This year, the long-awaited successor to the SSC Ultimate Aero will start being delivered. As the latest inspiration from an ex-Ferrari designer in concert with SSC North America, this car is expected to be beautiful and packed with the latest in automotive technology. It’s named after a reptile which has the fasted evolution of any living animal. For its internal mechanisms, it’s taken a lot of inspiration from the rockets and fast planes of the aerospace industry.

With low drag coefficients, an aerodynamic carbon-fibre construction, and a lightweight (yet luxurious cabin with minimal styling, this car seeks to beat its competitors by more than just a mile or two. Its top speed is claimed to be 482 kilometres per hour (300 mph), placing it above the Koenigsegg Agera by 25 kilometres per hour (15 mph).

As it uses a camera system instead of mirrors, this car is not expected to be road legal. Production is going to be limited to only 100 units.

The Hennessey Venom F5 is the very first all-new, proprietary automobile that Hennessey can boast as an accredited manufacturer. Perhaps for this reason, they chose an awe-inspiring name. F5 is a reference to the fastest type of tornado, which reaches similar speeds as this vehicle is claimed to be able to hit.

With a semi-automatic transmission or manual transmission on offer, this car will appeal to a wide variety of customers. The Venom F5 features a chassis and body made of carbon fibre, which gives it a sleek, aerodynamic feel. 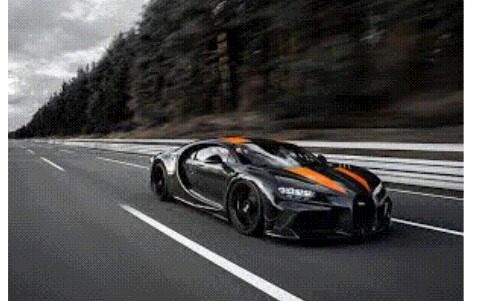 With the same gorgeous side-spiral that makes the entire Chiron line iconic, the SuperSport 300+ has an upgraded, more powerful engine. This means it has the same beauty that makes a Bugatti a Bugatti, but its top speed was increased from previous models.

This vehicle also has an external design reminiscent of the Bugatti’s other top speed record-breaking vehicle, the Veyron Super Sport. The Chiron Super Sport has an all-carbon fibre body for lightweight durability. Inside can be found a quad-turbocharged W16 which has earned the fond nickname ‘Thor’ for its lightning-quick speeds. If you find yourself wondering ‘what is the fastest car in the world’, buckle up! With the Jesko Absolut, Koenigsegg is seeking to set a new world record, and it looks like they’re on track to do just that.

Jesko von Koenigsegg was the father of the founder of the Swedish automobile manufacturer. The very latest in their line of supercars is named after him! The Jesko Absolut is focused on aerodynamics, downforce, and precise handling. With a slightly updated engine from the Agera RS to give the Jesko Absolut a higher redline, this new car is slated to break previous top-speed records completely out of the water.

The interior of the cabin has also been reworked to vary slightly from other Koenigsegg models. Drivers will enjoy more leg and headroom as well as a comprehensive climate control system, a 9.0-inch infotainment screen, and LCD screens in the steering wheel itself to relay vital information while cruising.

Along with these amenities comes incredible power. While Koenigsegg has not yet released acceleration information including 0-100 (or 0-60) numbers, it is rumoured that prototypes and simulations of this car can top 531 kilometres per hour (330 mph). What’s more: It attains that speed while remaining the fastest street-legal car in the world. Boasting unheard-of horsepower (5,007!) and a wait time that’s been driving the auto industry crazy (the prototype debuted in 2013), the Devel Sixteen is poised to completely smash the current top-speed world records. While most of the automotive industry is hoping to break the 482 kilometres per hour (300mph) barrier, the Devel Sixteen seeks to break 560 kilometres per hour (350mph).

Because little is known about the exact specifications of the Devel Sixteen, we can’t quite compare its acceleration numbers to the others on our list. However the car does have (rumoured) incredible horsepower and a top-speed potential of ~560kph (350mph). If this turns out to be true, this will truly be the hypercar which sets the tone for the next few years within the supercar industry.

Content created and supplied by: Kyovestdavid (via Opera News )