The new concept car is a technology marvel that has the world talking. 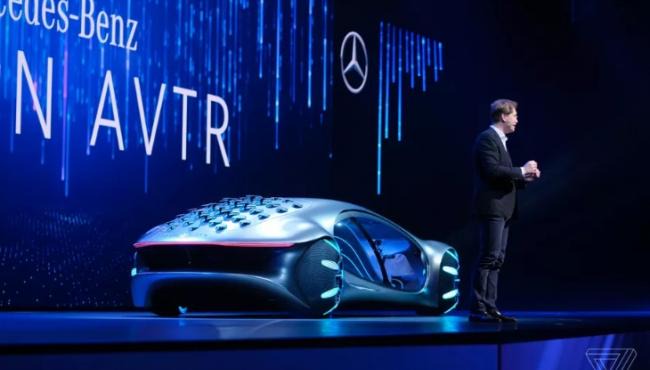 James Cameron's "Avatar" broke all the molds when it came out in 2009, pioneering unique motion capture and 3D filming techniques that the world had never seen before. It captivated our imaginations and is serving as the foundation for no less than four sequels — the first of which is scheduled for 2021 — and is spurring a showcase at Disney's Animal Kingdom.

"Avatar" is also the inspiration for this out-of-this-world Mercedes Benz that could have been plucked directly from James Cameron's imagination.

If you've ever wanted to drive something that looks like it would be right at home in the methane-rich atmosphere on Pandora, then Vision AVTR is the car for you. This concept has it all, from spherical wheels with a spiral pattern that resembles the seeds from the Tree of Souls to a series of 33 bionic flaps that move and breathe as the car navigates.

Mercedes calls them bionic flaps, but let's correct that — they're scales. They look like dragon skin, reminiscent of the Ikran or the Toruk from the movie.

The Vision AVTR doesn't have a steering wheel, assuming that by the time something like this comes out, we'll have mastered autonomous cars and won't need it. Instead, you'll interact with the vehicle through a controller that will vibrate based on your breathing and heart rate, creating a merging of man and machine.

Car enthusiasts are likening it to how the Na'vi connect with their mounts, trees and one another in the film. It seems kind of out there, but there's a lot of good here too. This concept relies on graphene-based battery packs that are organic and could potentially be compostable once they've reached the end of their lifespan. The interior is decked out with vegan leather and recycled plastic, making it more sustainable than modern cars.

Of course, not everyone is a fan of its unique look. One writer said it looked like a cross between a dinosaur and a Mars bar that you've been carrying in your back pocket. We like it, though.

A History of Innovation

This instance isn't the first time Mercedes has set the bar high when it comes to innovation in the automotive industry. The brand has more than 130 years of engineering and innovation under its belt. Today, the company owns 12 different brands in 200 different countries, employing more than 300,000 people around the globe.

One thing that sets Mercedes apart is their current plan to reduce the company's carbon footprint and environmental impact. The Vision AVTR is just one example of this — a car out of our imagination, made of recyclable materials and fueled by a compostable battery that you could use to grow your vegetable garden once it no longer holds a charge.

Whether you're a fan of "Avatar" or not, the Vision AVTR is a concept that will catch your eye, both because of its unique look and the moves toward sustainability it promises. We might not see it driving on the surface of Pandora, but it's a step in the right direction when it comes to green initiatives.