The Most Expensive and Rare Cars Of All Time (See Photos)

Some people think that cars just get you from A to B. Those people, dear readers, are wrong. Cars are one of life’s greatest pleasures, and if you ask me, the rarer: the better. In this list, I’ll reveal some of the greatest motor vehicles of all time. Warning: they’ll give you some serious car envy. Here are ten of the most expensive rare cars of all time.

The ultimate sports car of its generation, this 1939 beauty from Alfa Romeo is one of only 12 ever made, which is probably why it sold for $19,800,000 in 2016. It was also the first of its kind to be offered at public auction this century, which probably helped boost its price too.

Originally designed as a bespoke decadence for upper-class clientele, the designers packed this car with cutting-edge technology that offered the ultimate driving experience. It’s impressive inside and out: the lightweight exterior is one of the finest of its time, and under the hood there’s a 2,905 cc engine, which is where the car gets its name from.

They say this supercar is the Italian equivalent of the number one car in this list. Any guesses what it might be? Let’s see if you can get it before the reveal.

Cars don’t always have to be vintage to be worth a stack of dollars, as Ferrari proved in 2016. The Italian supercar giant produced 500 of the coupe version of their LaFerrari, which literally means ‘The Ferrari’ in Italian. Very inventive, guys.

This hybrid sports car is the most valuable 21st-century automobile ever sold at auction, raising $7 million at an RM Sotheby’s auction. The model sold was the 500th and final LaFerrari they built, which is why its price tag was significantly higher than the other 499 which retailed at around $1.5 million each.

Fancy getting your hands on your very own LaFerrari? Good luck! According to Ferrari, several high-profile buyers were turned down when they tried to secure their very own LaFerrari. Basically, if you’re not already a very good Ferrari customer like Jay Kay from Jamiroquai or Shark Tank’s Robert Herjavec, you can forget it.

Most of the cars in this list come from Europe, but this beauty comes from the good old U.S of A. Ford’s GT40 Gulf claimed its place in the history books when it became the most expensive American car ever sold, attracting a whopping $11 million.

What contributes to the super-huge price tag is its unique history: none other than Hollywood’s king of speed Steve McQueen himself owned this 1968 mean machine. It featured in a series of films including the 1971 classic ‘Le Mans’, and Bullitt. Who doesn’t want to own a famous car?

At one point, McQueen decided to kit out his GT40 for live action race filming, cutting a hole in the car’s roof to make room for the camera. That didn’t put off the buyer though: apparently owning a piece of race car history is more important than it being in good condition.

Move over USA, the Brits are proving to be almighty at producing classic sports cars: this Jaguar’s 1955 D-Type, for instance, sold for an incredible $21,780,000 at RM Sotheby’s. They manufactured the D-Type between 1954 and 1957 and towards the end of its production run they bumped the 3.4-litre engine up to 3.8 litres, before reducing it to 3 litres to comply with Le Mans’ race rules. Confusing, right?

And speaking of Le Mans, Ecurie Ecosse raced this particular D-Type to victory in the 1956 ’24 Hours of Le Mans’ race, cementing its place in history. Before the 2016 sale it had only had two private owners after Ecosse. It was actually owned by a single private collector for 16 years before the sale, so it really might have been a once in a lifetime opportunity to own this example of race car royalty.

The first of many vintage Ferraris in this list is the 275 GTB series. They only produced 970 of this in total, so it’s quite rare for one to come up for sale. The super series consisted of three two-cam models and two four-cam models, and both versions are highly sought after among the world’s biggest Ferrari aficionados.

There is a rarer 275 out there, though – the GTB/C Speciale. They built this one-of-a-kind prototype to compete at Le Mans and it finished third in the 1965 race. When this ultra-rare car came up for auction in 2014 it went to a lucky bidder for $26,400,000. I wonder how much it’ll be worth when it goes up for sale next. Any guesses?

As we reach halfway in this list, let’s test your pricing talents with a bit of trivia. How much do you think Captain Nemo’s car from the League of Extraordinary Gentlemen sold for at auction? I’ll reveal all at the end, so let’s see whether you can get it right.

They built this particular model originally for Juan Manuel Fangio, so it’s got a history that’s extremely interesting to motorsport enthusiasts. The 3.5 litre, V-12 engine car had a top speed of 170 miles per hour; Fangio raced it in the 1,000-mile Mille Miglia in Italy. Amazingly, despite its illustrious racing career it has never crashed.

They only made four of this 290 MM, and one of it remained in collector Pierre Bardinon’s renowned Mas du Clos Collection in France for almost 24 years. It’s unknown who bought the car in 2015, other than the fact that it was a private European collector. If it was you, let me know and maybe we can go for a spin.

This legendary Formula One race car is every motorsport fan’s dream, because Argentinian Formula One racing legend Juan Manuel Fangio actually drove it to many wins.

Why is this Mercedes so expensive? Well, it ticks all the right boxes. It’s ultra-rare and only 14 of the W196Rs ever existed. Right now, only ten are left there and only this one belongs to a private owner. It’s also a technological gem and was the very first fuel-injected F1 car. It was sold by Bonham’s at the Goodwood Revival in 2013 for $29,600,000, and the bidder won over the phone so they remain a mystery.

Another Mercedes made the news earlier this year for its history not for its price. A 1939 770L Grosser Offener Tourenwagen used by Adolf Hitler received a bid of $7 million at an auction because it didn’t meet the seller’s undisclosed minimum price. The US Army seized this ‘Super Mercedes’ in 1945. Had the car been sold, 10% of the sale would have been donated to a Jewish human-rights organisation. 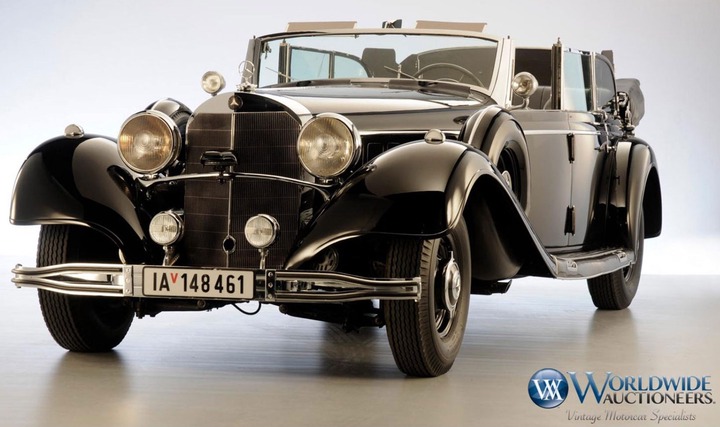 There were only four ever made, and its looks are as famous as its power. With a maximum power of 390 horsepower, it can do around 190 miles per hour. They built the 335S in direct response to the Maserati 450S, whose 4.5-litre engine threatened to blow the 3.8-litre engine of Ferrari’s 315 S out of the water. There’s nothing better than a bit of healthy competition, right?

Despite its astronomical price, the new owner probably won’t get much use out of their 335S: it can’t be used on the road as the manufacturers designed it purely for racing.

Which 250 GTO, you ask? Well, all of them actually. An incredible 41 models from the series claim a place on the list of the 100 most expensive cars ever sold at auction, so the entire range deserves a mention.

The Berlinetta model claimed the top spot on the list after being sold for $38,115,000 at auction in 2014, but a private sale almost doubled that price earlier this year: German race car driver Christian Gläsel sold his 1963 model for at least $70 million!

The GTO series go for so much money because they’re so rare: only 36 were made between 1962 and 1964, so it’s extremely uncommon for one to be available to buy.

Here’s Bit of trivia for you: although Ferrari doesn’t top this list of most expensive rare cars it does dominate the most expensive cars list. How many spots do you think Ferrari claimed? 62 out of 100 cars. Incredible, huh?

Number 1 is this rarer than rare black beauty from Bugatti. There were only four of them ever made, and only two have survived t o this day. A 1938 model is owned by fashion magnate Ralph Lauren, while the 1936 version was sold privately in 2010 for a rumoured $40 million, which is almost $46 million today.

So, what makes this car the most expensive rare car ever? Well, other than its actual rareness, it’s also a thing of beauty. So much so, in fact, that Ralph Lauren’s version won the prestigious Concorso d’Eleganze Villa d’Este award in 2013.

The iconic rivets on the outside make it instantly recognisable, as does the classic shape of the lightweight aluminium body. Not content with just making a beautiful car, the Bugatti family also made sure that the 57SC series was frighteningly fast. It could do more than 120 miles per hour… In 1936! I’m going to start saving up so I can make Ralph Lauren an offer.

And finally, did you leave your guess for the auction price of Captain Nemo’s car? I can reveal that it sold for $45,000. A bargain, if you ask me! This was a custom made vehicle for the movie ‘“The League of Extraordinary Gentlemen”, so its as rare as they come. At 22 feet long, with 6 wheels, It has lots of ornate metalwork and prior to being sold, was kept at a prop store. Still, I can’t help but think it looks like a fancy giant tissue box.

That concludes my list of the top ten most expensive rare cars of all time. Which one would you love to own the most? Let me know in the comments. Thanks for reading.