Top 10 most expensive cars in the world

The Sian is Lamborghini's most bold and innovative efforts yet,with a hybrid system that uses lithium-ion supercapasitors to it's advantage, making for hybrid that doesn't compromise weight for immense power. Drivers            can expect 819 horsepower,2.8 seconds to reach 60 mph.and a top speed of over 220 mph. And with design inspiration coming from the countach, even at a glance,the Sian is unmistakably iconic. 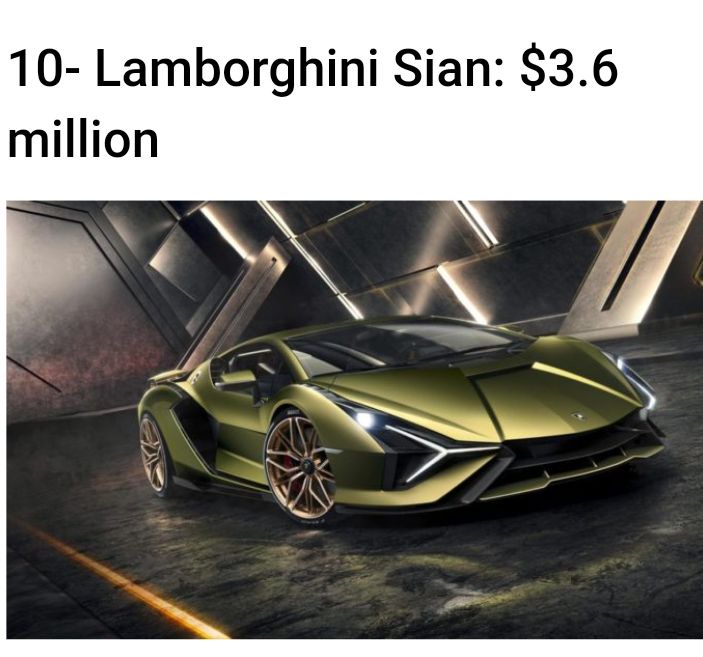 It's human nature to try to improve,to test the limits of whatever is in front of you. But for the past years, nobody has done that quite like Bugatti .They changed the world when veyron was found to be capable of 253 mph,and now they are changing the world again because the Chiron super sport is capable of speeds above 300 miles per hour. For the chance to travel at that velocity alone, the price can easily be justified. 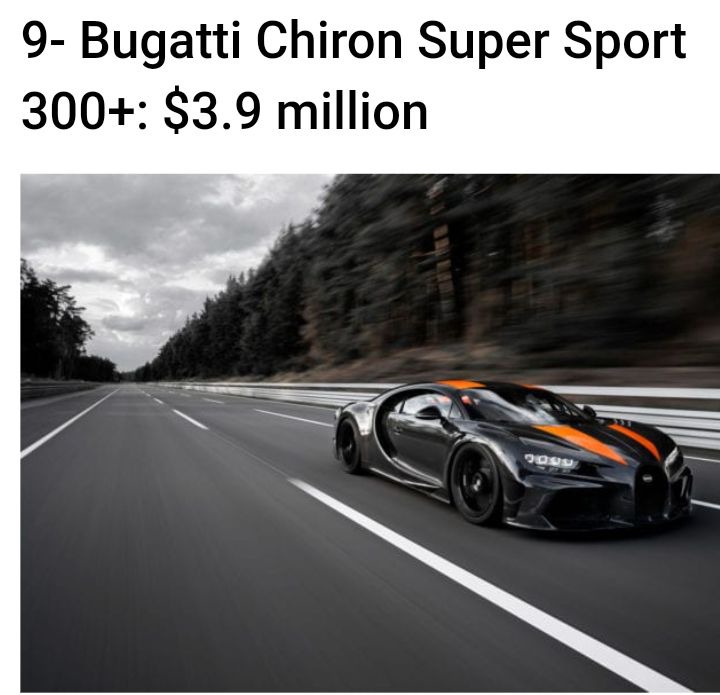 The Lamborghini packed full of incredible innovation and stirring design is surely worth of all the hype, and all the money, not least because it was a clear symbol to the world that Lamborghini had entered a new era. Squeezing 740 brake horsepower out of the equation, with an entirely new, but still very Lamborghini body design that was optimize for cooling and aerodynamics to follow. The Veneno was and is one of Lamborghini's greatest icons. 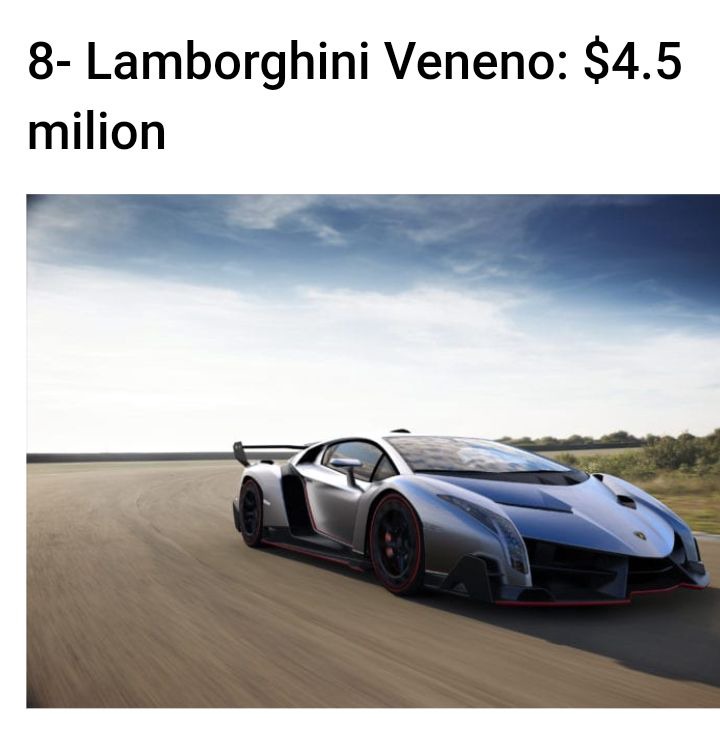 The name "Trevita" is swedish for "three whites" which is what describes the Trevita's completely unique and gorgeous finish, For this car , Koenigsegg developed a completely unique carbon fiber diamond weave to create it's look, and because of how difficult this process was, only two Trevitas ended up being made, one of which was entrusted to Floyd Mayweather. It takes quite the car to justify that price,and the CCXR Trevita does the job. 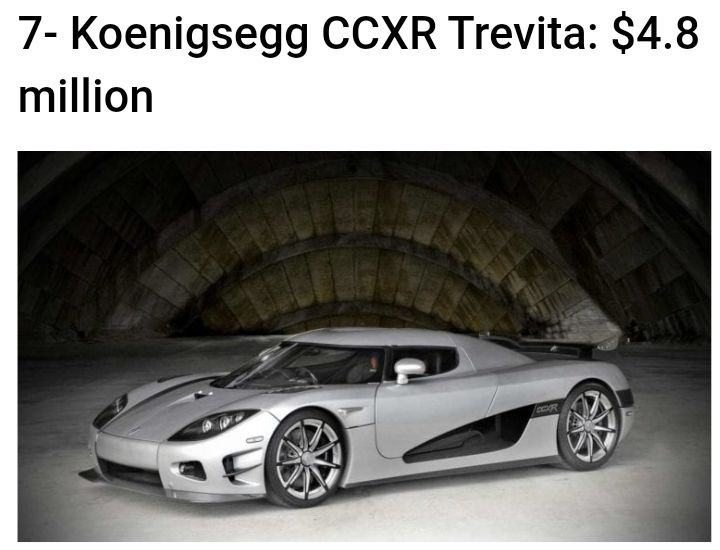 The Huayra Imola is a car that is entirely dedicated to speed. Pagani went to the length of even developing a special paint to first the car in that saved 11 pounds of weight of just 2,747 pounds. Combine that with 827 horsepower, and you end up with a car that is just about as formidable, unique, and extravagant as anything can get on the road. As if Bugatti's offerings weren't serious enough, the Divo is just about a serious as any of their cars have gotten. While most Bugattis are known for being cars that reach incredible speed in a straight line, the corners, and 1.6 Gs of lateral accelerate that's exactly what it does. With Bugatti always being at the forefront of performance,we had no clue that things could take a turn for the better. 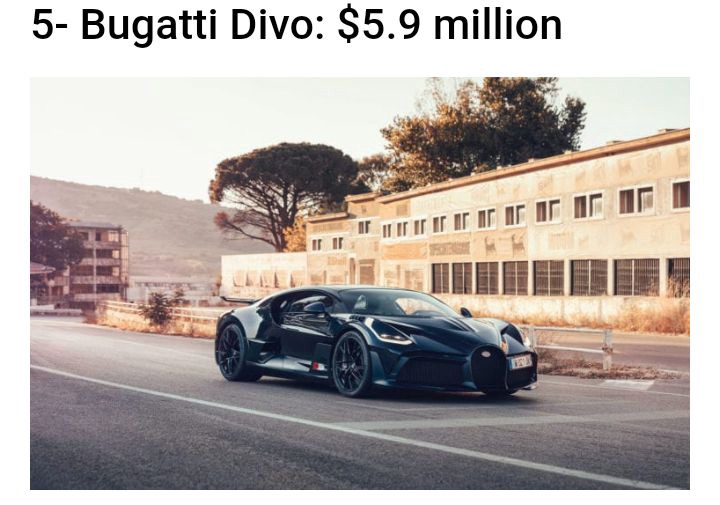 The Buggatti Centodieci is an homage to a modern classic: the EB110. The 200+ mph icon of the 90s, combined with the body of work Buggatti had today can only make for a truly amazing, one of a kind, and inherently expensive car. There will only be 10 of these, which is unfortunately because nostalgia isn't the only reason the Centodieci is amazing. It improves upon the Chiron, shedding nearly 45 pounds and adding downforce. 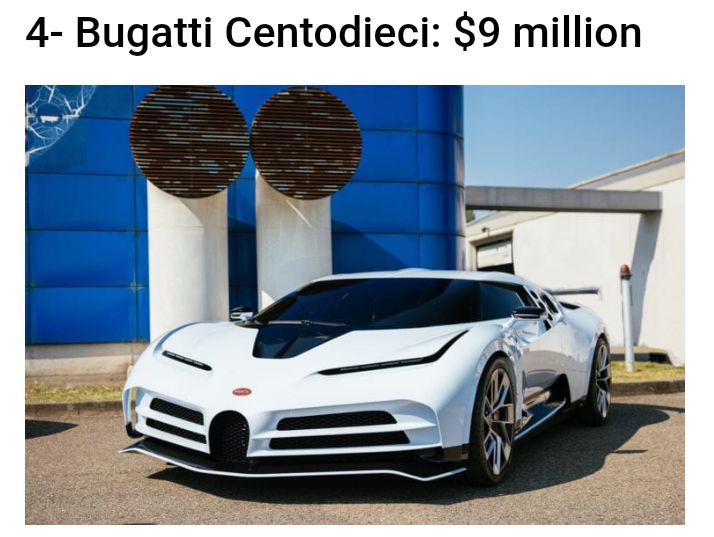 This breathtaking exclusive one-off Buggatti was inspired by the legendary Type 57 Atlantic of Buggatti's earlier history. Buggatti sought to recreates the sophistication and mysticism of the Atlantic, but most importantly , the legend of the perfect car. with features that echo the Atlantic of old like six tailpipes and a dorsal seam across the middle, La voiture Noire is unique to its core. 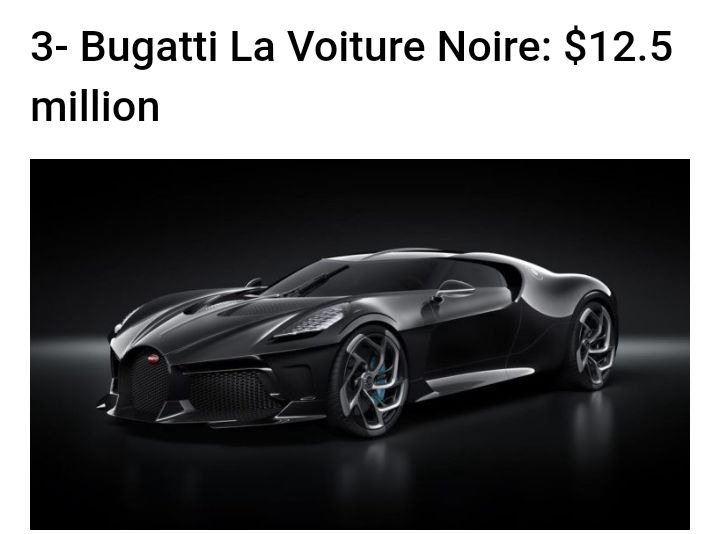 The Sweptail's defining feature and namesake is the trapered rear end, approximately evoking a yatch, and the sense of pure pleasure and luxury that only a Roll Royce can offer.with a glass roof that extends from front to back, and wood and leather decorating nearly every interior surface,the Sweptail is just like yatch, but maybe even better, hence it being priced like one. The Pagani Zonda is, by itself, a car we know to be epic and historic in the world of supercars.Its completely distinct look, formidable Mercedes-Benz 7.3 liter V- 12, and outstanding performance have made it a classic and a legend. That makes a car like the HP Barchetta the perfect way to do it justice As if the Zonda wasn't eye-catching enough, the HP Barchetta feature rear wheels that are partially covered by a carbon fiber panel, and a roofless ( and almost windshield-less) body design, hence the little of the most expensive car in the world of all time. 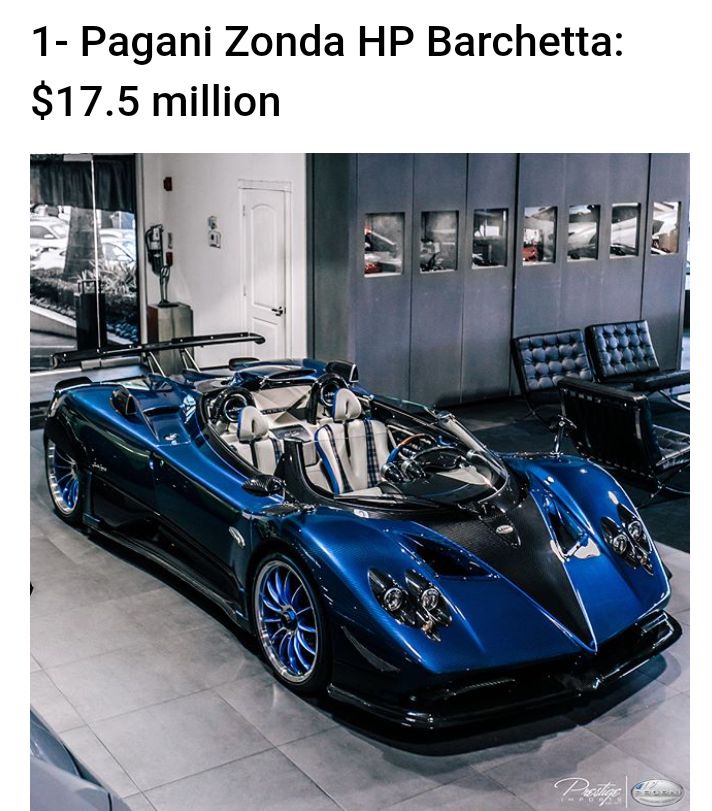 Content created and supplied by: Reelz4U (via Opera News )