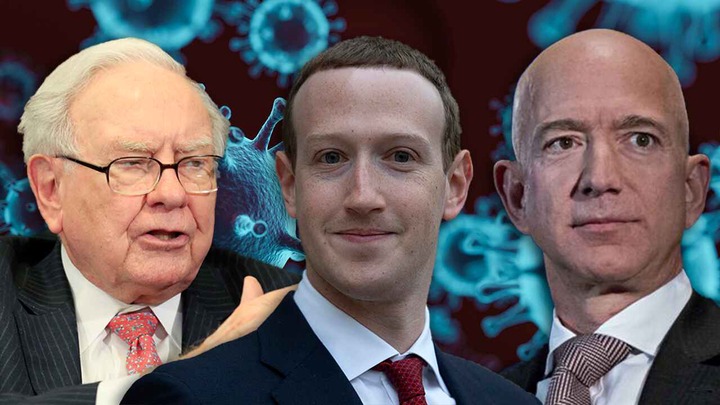 Money is good, I swear!

Poverty must die in our lives o!

Say to yourself: 'I must make it!'

Anyway, according to Forbe's, due to the coronavirus that affected businesses and bashed the global economy, the richest people in the world saw a decline in their fortune from last year.

Presently, there are 2,095 billionaires in the world, with a combined estimated fortune of $8 trillion. This figure is $700 billion less than what they had in 2019. The United States has the highest number of billionaires, with 614 billionaires in the rank of World's richest men. China occupies the second place, with 456 billionaires.

For this article, we will consider not only what the top 10 richest men in the world are worth right now, but also how much they add to their wealth every single second of each day.

Grab on to your seatbelt; this will totally blow your mind and cause you to double your hustle. With an estimated $113 billion fortune, Jeff Bezos is the current richest man in the world. He is the Founder/CEO of e-commerce giant, Amazon. His earnings per second is put at $2,489. Founder of Microsoft Corporation and Co-chair of the Bill & Melinda Gates Foundation, which is the largest private foundation in the world. Gates earn an estimated $380 per second. He is the CEO of the luxury good company, LVMH. He makes about $0.407 every second. He is the Founder and Board Chairman of the Software giant, Oracle. He earns about $0.32 per second. Ortega is the richest clotheor retailer in the world and makes approximately $0.32 every second. Founder and Chairman of Facebook, mark makes about $2,149 per second. Businessman and investor, son of the Founder of Wlamart (Sam Walmart) She is the richest woman in the world right now and only daughter of the Founder of Walmart. Rob is the eldest son of Sam Walmart (Wal-Mart Founder) and has control share of a sizeable part of the company.

*The Walton Family, currently rated by Forbes as fhe richest family in the world, earns an estimated $1,111 per second.

Now, these earnings for every second by these heavyweights may seem little in your eyes, but think again. In many countries of the world, senior civil servants and company managers don't want $1,465 a month. Arnault's daily salary would then exceed $35,000 per day!

Per day! Many people would be glad to earn that amount of money annually. Do the math. To put things in perspective, check your current salary and break it down to see how much you make per second, minute, hour and per day.

And while you're at that, respect these guys and work hard. Perhaps you'll get to that level of life in some years to come.

Even if you don't get to achieve that height financially, at least you'll achieve something worthwhile for yoir family.