19 Awards Nigeria’s Nominee, Mrs. Ngozi Okonjo Iweala Has To Make Her Preside Over The WTO Director 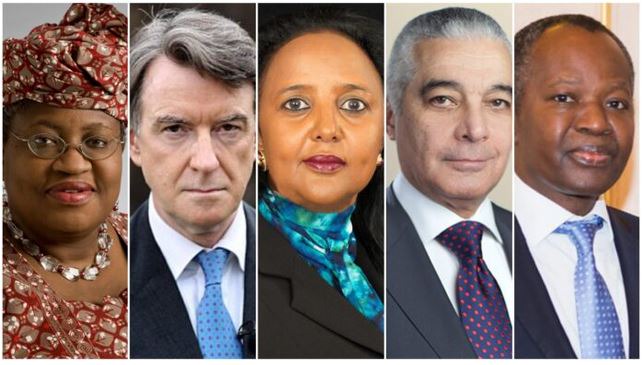 The World Trade Organization (WTO) is the only global international organization dealing with the rules of trade between nations. At its heart are the WTO agreements, negotiated and signed by the bulk of the world’s trading nations and ratified in their parliaments. The goal is to ensure that trade flows as smoothly, predictably and freely as possible.

WTO is an independent multilateral body which sets the rules and regulations for global trade and provides the arena for negotiations and dispute settlement.

It can be recalled that the WTO announced that Mr. Roberto Azevêdo, the current WTO Director-General would step down on 31 August, 2020. The post for the new Director General (DG) of the World Trade Organization (WTO) became vacant for candidates to apply. The candidates were nominated by their respective governments for the post of WTO Director-General.

The candidates are listed in the order the nominations were received.

Phase I of the selection process, nomination of candidates, for the new Director General (DG) of the World Trade Organization (WTO) ended on July 8.

WTO members have nominated eight (8) candidates, 3 women and 5 men, and they are as follows:

1.    Dr. Ngozi Okonjo-Iweala of Nigeria – specialist in development economics/former Minister of Finance and of Foreign Affairs and World Bank employee

This is the opportunity for a Nigerian to oversee the World Trade Organization, WTO. This time, the president nominated Dr. Ngozi Okonjo Iweala. {Wise Choice}.

This is a woman I have come to appreciate her success and the pride of place she has bestowed on Nigeria with her professionalism. Dr.. Ngozi Okonjo Iweala has all it takes to preside over the WTO. Dr. Ngozi Okonjo-Iweala is a Nigerian economist, author and an entrepreneur.

She has been Independent Director of Twitter, Inc. since July 19, 2018, and Senior Advisor of Lazard Ltd since September 21, 2015. Dr. Ngozi Okonjo Iweala has worked with Asian Infrastructure Investment Bank and she is also an Adviser to World Bank on the Stolen Assets Recovery initiative. She served as Managing Director at The World Bank Group from December 1, 2007 to August 2011.

Dr. Okonjo-Iweala is the first woman to be the finance minister and the foreign minister of the West African country with a GDP of $502 billion. Before serving as Minister of Foreign Affairs of Nigeria from 2003 to 2006 and Coordinating Minister for the Economy and Honourable Minister of Finance of Nigeria until 2015, she served in a number of important positions at the World Bank such as Vice President and Corporate Secretary, Director of Operations in the Middle East and North Africa region and Country Director for Southeast Asia and Mongolia Country unit. Not too long ago, South African President, Cyril Ramaphosa appoints Ngozi Okonjo-Iweala as a member of the Economic Advisory Council of South Africa. With over 30 years of economic development and financial expertise and as an internationally renowned economist and a prominent African leader/

The Harvard- and M.I.T.-trained Dr. Okonjo-Iweala spent 21 years as a development economist at the World Bank. 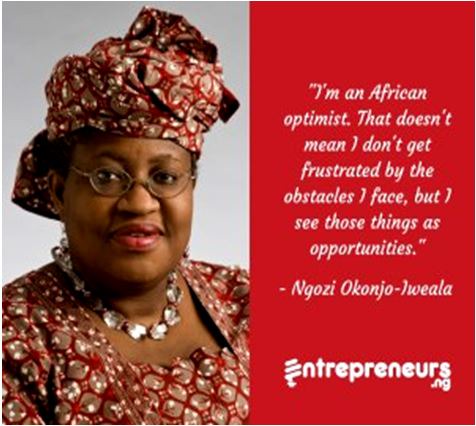 She had her secondary education at International School Ibadan and St. Anne’s School, Molete, Ibadan. Dr. Ngozi Okonjo-Iweala proceeded to Harvard University where she graduated with an AB honours in Economics in 1977. She holds a PhD in Regional Economics and Development from Massachusetts Institute of Technology (MIT).

Dr. Okonjo-Iweala is married to Dr. Ikemba Iweala, a retired neurosurgeon and emergency physician. They are blessed with four children, Uzodinma Iweala, Onyinye Iweala, Uchechi Iweala and Ikechukwu Iweala. One of her sons, Uzodima Iweala is an American author and medical doctor.

Dr. Okonjo-Iweala started out as an intern in World Bank Group. After graduation, she returned to World Bank Group and worked for many years as a development economist. She held the post of Corporate Secretary and Vice President.

Following her role as Vice President, she was appointed as Nigeria’s Finance Minister under President Olusegun Obasanjo’s administration.

Dr. Ngozi Okonjo- Iweala’s impact was felt as the Minister of Finance under President Olusegun Obasanjo’s administration as she and her team carried out notable projects including building electronic financial management platform for government.

Dr. Ngozi Okonjo-Iweala was reappointed as Finance Minister during President Goodluck Jonathan’s administration, with expanded portfolio of the coordinating Minister of the Economy.

In 2015, she joined Lazard, a financial advisory and asset management firm. She serves as a Senior Advisor in the organization. 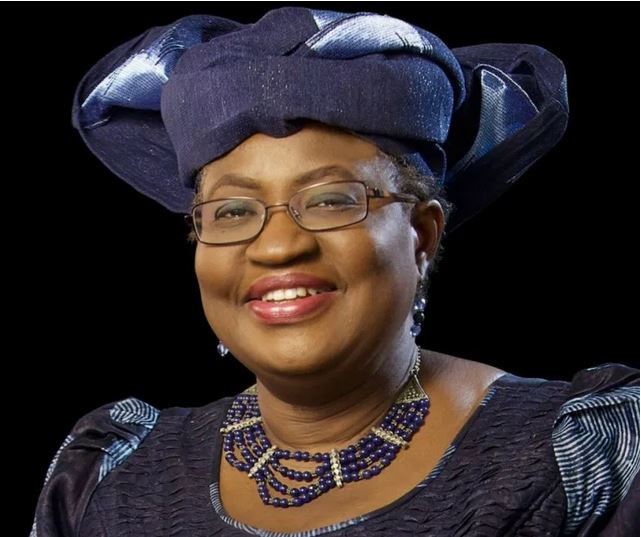 Some of Okonjo-Iweala’s Achievements as a Minister

Other Interest of Dr. Ngozi Okonjo-Iweala

Dr. Ngozi Okonjo-Iweala was appointed as the independent non-executive director at Standard Chartered PLC in July 2017 and also Twitter’s Board of Directors in July 2018.

She is also a member of International Commission on Financing the Global Education, the Women’s World Banking, the World Economic Forum Young Global Leaders Foundation, Result for Development Institutes, the B Team.

She was a member of International Monetary and Finance Committee of the IMF, the United Nations’ Secretary General’s High Level Panel, the Danish Government Led Commission on Africa, the Commission on World Growth and the World Economic Forum Global Leadership Council.

Dr. Okonjo-Iweala is a distinguished visiting fellow at the Centre for Global Development and the Brookings Institution.

She has served on the advisory boards of the Clinton Global Initiative and the ONE Foundation.

Fight of the Titans

As can be seen from the biography, awards, achievements and success of our flag bearer, Dr. Ngozi Okonjo Iweala, she is qualified, to take up that position. It is indeed going to be a fight of the titans but I am confident that she will come up victoriously.

Nigeria and Nigerians have done it in the past and the selection of our own "Ngozi" will not be different.

Dr. Ngozi Okonjo Iweala is more than qualified to do Nigeria proud, once again.

Go, Dr. Ngozi Okonjo Iweala, do us proud, like you have always done.

Do you agree or disagree with my motion for Dr. Okonjo Iweala to be the next WTO President?

Don’t forget to follow and like my page as am here to feed you with exclusive and up-to-date information.

Thanks for reading my first article.