Why didn't the USA try to stop China's economic rise 40 years ago rather than now? 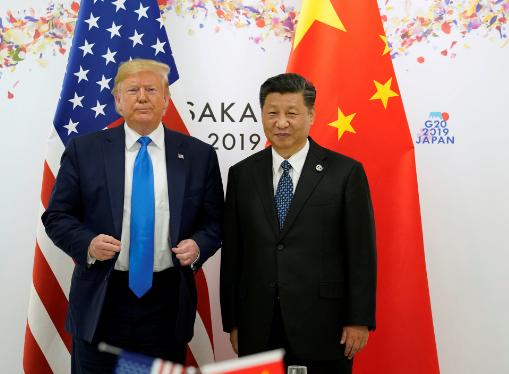 The USA was powerless 40 years ago, fearing nuclear retaliation from China, and now the USA is totally impotent as China has opened its doors to the world, but because of the USA’s belligerence only a crack to the USA. With someone as diplomatically incapable and economically naive as Trump as President of the USA, that door could slam shut, and the Chinese government in Beijing won’t have to do a thing. The door is edging towards being slammed shut on USA enterprises by the Chinese people. Already, there is a people’s movement to boycott USA business in China. This has panicked USA businesses who have been putting pressure on Trump to reverse his amateurish policies that is hurting the USA economically, and lowering the standard of living in the USA. Trump is right that the tariffs have increased the government’s coffers, but that is because his tariffs are a tax inflicted upon USA consumers & businesses. China has not contributed one cent to the USA coffers, China is not paying for the tariffs, the residents of the USA are! As has been the USA’s modus operandi in other economies, the USA hoped to subjugate China through economic dependency (withhold or supply investment, apply sanctions or special trade status). When a country became too independent, the USA sought to wipe out that country’s economy. This is what the USA did to Japan in the 1980s, and to rub salt into the wound, made Japan give the USA its intellectual property. The USA is a mature economy with nowhere to expand, which is why its economy is contracting. The USA hope was by aiding China to develop, by giving it a special trade status, it would be able to expand into China’s then slowly emerging economy.

However, China, employing its “for the common good” philosophy, meaning the common good of its people, invested in education of its people and spent big on implementing infrastructure (ports, roads, power, comms, etc) within China, and created a magnet of efficiency that attracted alternative investment from private industries, which ultimately led to the USA military & private industry being dependent on China for completed electronic circuitry. Most USA residents are not aware that China leads the world in AI & Robotics, and employs both in its manufacturing processes. The USA hasn’t a hope in heaven nor hell in stopping China’s economic rise! In fact, Trump’s stupidity in economic and diplomatic policy could well see the demise of the USA. Trump hasn’t just targeted China, he has applied tariffs on all countries that have a trade surplus with the USA, which has really pissed off the USA’s traditional trading partners and military allies worldwide!

Unlike other nations who were forced to surrender to the USA’s belligerent bullying, China has no fear of the USA threat of military intervention. They too have a nuclear capability and can reciprocate any USA aggression in kind.

In short: China won’t allow the USA to sodomize it, the way the USA sodomized Japan in the 1980s, but unlike the USA, Chinese business ethics prohibit it from fucking the USA = better to seduce than ravage, that way there is mutual benefit.