How A Rich Lady Tricked Me Over A Meeting, In A Foreign Restaurant (fiction).

By Ovie_Ohwovoriole (self media writer) | 1 year ago I was surfing on the internet, precisely on facebook, when I got a friend request from a young, pretty lady, I checked up her profile, and she did appear to be a rich girl.

I could see her pictures taken inside a very fine mansion, with other people who had resemblance with her, I hurriedly concluded she was a rich chick, from a rich home, so I accepted her friend request without wasting further time.

Surprisingly, this pretty lady, started chatting me up, indicating interest on meeting with me, which got me excited, I broke the news to my close dude via whatsapp, that I have gotten a rich lady, who is interested in meeting up with me.

I and my close dude, continued our chat, scheming several means I was going to use, in extorting money from the pretty lady, one, I needed an iPhone, and also wanted a reasonable cash in my bank account, I thought the young, pretty lady was going to be a prey to my schemes.

On the day she called me on phone, after exchanging our contacts on our previous chat, she proposed and official date, in a foreign kitchen Restaurant.

I hurriedly told her, that as much as I wanted us to see, I couldn't afford such expenses on a date, because I had recently invested most of my cash into a business, that may likely not bring it's turn over, after two months, she laughed and said, it was not a problem.

She went on to explain why, she never expected me to foot the bills on the date, by saying, she was the one taking me out.

I felt so happy in my inside, things were already working according to my plan, sooner than expected, so I thought.

I quickly communicated with my close dude, on the progress of things, and he was happy for me, thinking that finally, I was to get some financial gain form the rich lady.

Then like a the speed of light, the set day for our date came, we planned meeting at the foreign restaurant at 4pm. I arrived at the restaurant 30 minutes before time, to keep a good impression, by not keeping her waiting, so I waited for her.

At exactly 5 minutes towards 4pm, a red Mercedes, GLK to be specific, pulled up at the car park, behold it was the rich chick, I met online, she came in, and I waved at her, wearing a big smile on my face, she came over and ordered a drink immediately.

While we drank, a white lady came and took our request, we gulped the wine slowly as we discussed, I appreciated her looks and also her iPhone.

I even made comments like, I planned of changing my Android to an iPhone, but my investment wouldn't let me do that soon enough, she smiled at me, and said, It wasn't a problem, she has two, and wouldn't mind giving me one. I thanked her, but in my mind, I said “after this date she would never see me again”.

While we were chatting, she asked to see my Android phone, which I gladly gave to her, she she went through my pictures and other things I didn't take note of.

When our order came, I felt strange seeing how small the foreign delicacy was, though appealing to the eyes, when we were about finishing our meal, she started coughing, like someone chocking, the waitress came over, but this pretty, rich lady insisted on using the rest room. 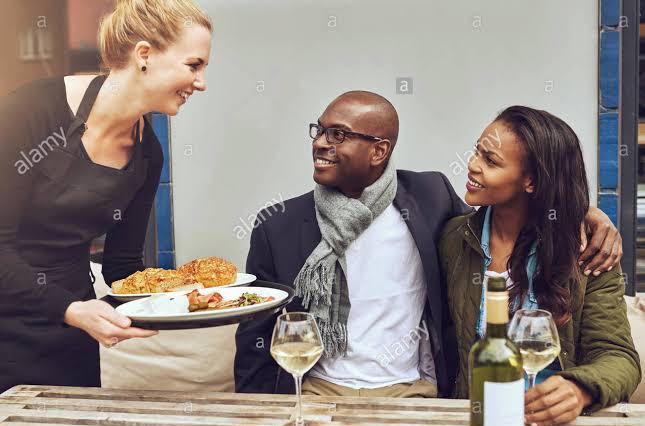 That was how I waited on her for more than one hour, and when I eventually laid the complain about her not returning to the table, some of the workers went in search of her, but she wasn't found anywhere in the establishment, nor her car in the parking lot.

I felt like crying, I thought to myself, this rich girl I was planning to extort, has succeeded in playing a fast one on me, I called her lines but they weren't reachable.

“Ahhhhhhh!” I lamented, my friend couldn't stop laughing on phone, when I told him, how I had to pay the bills for the Food, I and the rich lady ate in the Restaurant.

Much later in the evening, I got a text message from her saying “I saw your chat with a friend of yours, narrating how you were going to extort me, so you should understand why I did, what I did”, I blamed myself for not being a player.

If you are not a player, please don't try being one.

I wish to apologize to her, maybe she could give me another chance, what is your opinion about it?