7,000 Donations to Pizza Delivery Guy after Returning $7 Tip and Getting Insulted

An online fundraising campaign has accumulated $11,000 dollars donations for a pizza delivery man who was treated badly by a Massachusetts business.

The sales manager of a Westport car dealership had to apologize for the actions of his employees caught on the camera being rude and condescending to a pizza delivery man. The conversation in the office was focused on whether the driver thought he had been given a tip or if she should have given change for the order. 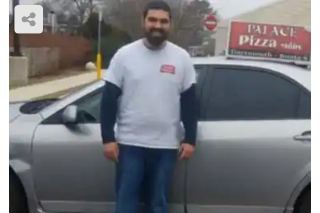 Gary Batista, the sales manager, gave this statement. “We will [sic] like to apologize for the actions that led to this situation, this embarrassing video gone viral on the Internet, was not released by any employee of F&R Auto Sales.”

A woman who saw the video online set up a GoFundme.com page and was able to raise $11,500 donations.

Palace Pizza delivery personnel Jarrid Tansey delivered $42 worth of pizzas and drinks to the car dealership. He was paid $50, broken down in two $20 bills and two $5 bills. When Tansey got back to the restaurant, someone from the car dealership had called asking for the driver to return with their change, which was $7 and some coins.

The video begins when Tansey returns to the dealership with the money. When he gives the man at the desk the money, Tansey says, “It just doesn’t make sense why you’d hand me a bill that you were just gonna have me drive back here to give you back anyway.” 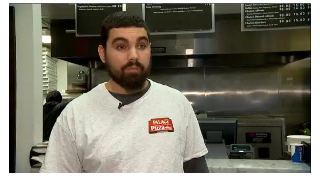 The man replied, “I gave you everything they gave me so we would get the correct change.”

The two have an exchange of words.

As he turns to leave, Tansey says, “I’m not mad, I just had to waste my resources coming back here.” Then follows an exchange of words with several employees, but one female employee follows him out and taunts him by saying, “Out the door before I put my foot in your a–.” The other employees can be seen and heard laughing at the comment.

According to the auto dealer manager, that woman has since been let go. One of the people involved in the video was not employed by the dealership. The video ends when one of the male employees tells his colleague to call the owner and manager because “he wants him fired” (referring to Tansey).

One of the people who saw the video was Amanda Rogers, a former waitress. She was so moved by the video that she called the pizza place to ask for the name of the delivery personnel because she wanted to send him a check. 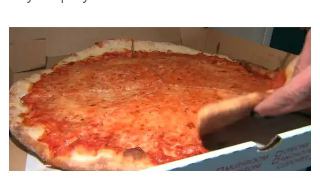 Rogers says, “For them to call him back over money he should’ve received anyway. I decided to take it one step further. Why not get the kid more than he deserves?”

She then set up a fundraising page for Tansey. It’s called “Get Jarrid his tip money!”

Many of the viewers are leaving $7 donations, which is the amount Tansey had to return to the dealership employees. One of the comments on the page said that Tansey is a good example of treating people the way you want to be treated.

Rogers hopes that the video will show that there are nice people in the world.

The video appears to be from a surveillance camera. It was posted on YouTube with the headline.The video has been made private. No one knows who posted it, but Batista said that it was not done by an employee of F&R Auto Sales. The manager of Palace Pizza says they have received an overwhelming amount of attention. He jokes that “It’s been tough to make pizzas with all the calls we’ve taken.”