Top 10 Richest Families In The World

By Alabiishola (self media writer) | 1 year ago 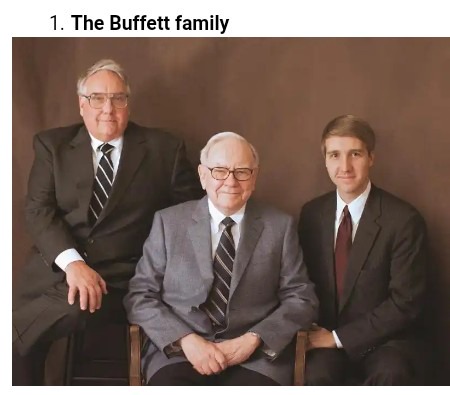 Since will 'probably' again close all country's and i didn't have time in recent days to write anything. Sorry about that. I'll write about most powerful and wealthness on the world, you can't even dream of. Here are 10 most wealthiest family's on the world.

Founded in 1720 the Saud family is the wealthiest family on the world. Family fortune is consider to be $1.4 trillion, but that's just on paper. In reality this family fortune is actually unknown how wealthy they are.... even the family itself. Rumors are that their fortune is infinity. No wonder, if the country will be named after your surname Saudi Arabia, you will ask yourself, how much wealth you had as well. :) The current head of the family is King Salman.

The Al-Sabah family is the second wealthiest family on the world. They are founded in 1752. The family is full of leaders and politicans. The family rules over 267 years now and, if we counted the history it will be even more. Their wealth is mesured to be $360 billion. Since early 90's their fortune was quadrupled. The current head of the family or Emir of Kuwait is Nawaf Al-Ahmad Al-Jaber Al-Sabah.

The House of Thani is the third wealthiest family on the world. The family has been the ruling family in Qatar since the mid-19th century. It also conclude 'the big three' of the Arabic country's on the world. The family also own the London's Shard skyscraper assets as well as famous firms like Volkswagen and Tiffany & Co. The current Sheikh is Sheikh Tamim bin Hamad Al Thani. Their wealth is counted to be $335 billion.

I think everyone heard of this family. If you don't; you probably live under the rock. :) The family is the wealthiest family in the USA. They own WALMART. Walmart is the world's largest retailer, one of the world. The company was founded in 1950 when Sam and Helen Walton moved to Northwest Arkansas and have pasion for retailing. The family had $195.1 billion.

The richest family in America. Particulary Jeff Bezos. He founded Amazon company back in 1994 and he is now the richest person in the world with this e-commerce. He is also owner of well known newspaper Washington Post. He is currently the welthiest American on the world. The family had $150.1 billion.

The family fortune is coming from oil. The Al Nayan family reign Abu Dhabi since 1793. Head of the family Sheikh Khalifa bin Zayed Al Nahyan. The family is also known for contraversy from year 1800 - 1900 when 5 brothers kill each other for the ruling position. The current ruler of Abu Dhabi is Khalifa bin Zayed Al Nahyan. They build the tallest building on the world, named Khalifa skyscraper. Their wealth is $150 billion.

Gates family fortune began when Charles C. Gates Sr. arrived in Colorado in 1904. Everyone knows Bill Gates. :) He is known as co-founder of Microsoft company. Lately he focus more on a charity life and education. In 1975, Gates and Allen formed Micro-Soft, a blend of 'micro-computer' and 'software', not bad for an two college drop-outs isn't it. The family is worth $106 billion.

I think that you also heard about this family. Some even say that the Koch family pull the strings behind the scene. But that is just a rumor. The family support Adolf Hitler since they are working under the Third Reich. They also do a 'Hail Hitler' salute or how it was said that greeting. Their wealth is counted to be about $83.8 billion+.

Genius investor Warren Buffett, who has been the chairman and largest shareholder of hugely-successful holding company Berkshire Hathaway since 1970. He is well known buisness taycoon. Not much i could dig on this family. Their fortune grown to be $80.8 billion. He promise to give away 99% of his wealth to the world, after his death.

If you eat at least one chocolate bar in your lifetime, it probably comes from Mars family factory. Once the richest family on the world during the late 80's. The roots go all back on 1883 to Franklin Clarence Mars who invented Milky Way chocolate bar and since then, they become candy moghuls. Their wealth is counted to be $78 billion. So go to the grocery store and buy some candy

Content created and supplied by: Alabiishola (via Opera News )