This Is How Much Jeff Bezos Makes Every Second, Every Minute, Every Hour And Everyday

Do you know how much the richest man in the world "Jeff Bezos" makes in a day? I mean, how much he makes in 24 hours. 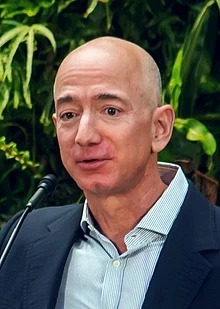 It's surprising yet when you think of it and remember that he is the richest man on earth, you calm your nerves. What does he use such money for? Why is Jeff Bezos still making money?

Jeff Bezos is currently the richest man alive and he became the first cent-billionaire in 2018 when his net worth crossed the $100 billion and peaked at $112 billion. If he was $112 billion rich back then, you can let your imagination run wild on how rich he is at the moment.

Jeff Bezos became the richest man in the world in 2017 after unseating Bill Gates who had made that spot his safe Haven, well I guess there are no safe Havens on the Forbes list if wealthiest people. As at July 13, 2020, Jeff Bezos net worth was calculated to be a whooping sum of $196.6 billion, wow, that's almost $200 billion, how did one man attain such heights?

Now to the business if the day, how much does Jeff Bezos make in a day?

In 2019 Jeff Bezos earning per day was calculated as such: Due to his net worth change (increase) from year to year, Jeff Bezos made an estimated sum of $6.54 billion in a month, which amounts over $1.5 billion a week and about $215 million and a day. What? $215 million a day, yes you are seeing right. This is how much Jeff Bezos, the wealthiest man on the planet makes in a day (24 hours). Narrow it down to how much he makes every second, if he makes $215 million in a day, then 1 hour will be $215 million divided by 24 which gives $8.96 million, then in a minute he makes $149 thousand, this is to say he makes approximately $2.49 thousand every second. Wow, this is so amazing. If you were were given $1 every hour for 100 years, you won't still be as rich as Jeff Bezos.

If you were given his one day earning, what will you do with it?