By RealAmebo (self meida writer) | 20 days

A man with known as Maazi Ogbonnaya has come out to relate an experience of when he went for a job interview Igboland. That job interview was his first job interview after completing his NYSC program. The man relates that he wanted to make an impression so he decided to out on isiagu dress along with beads on his neck and wrist, a traditional Igbo attire. The man relatess that all his interviewers were Igbo. 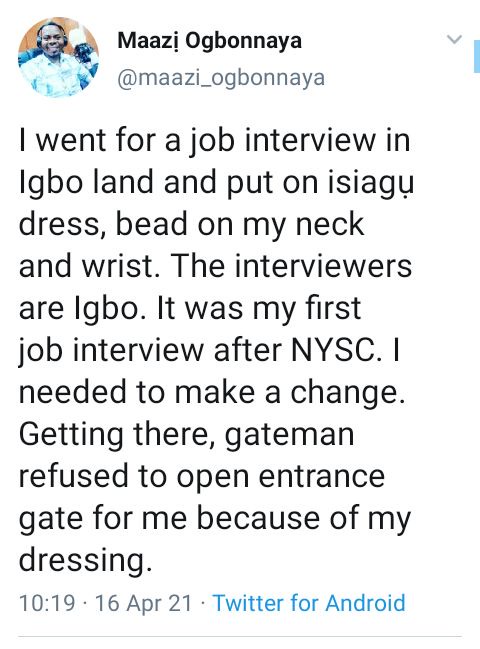 Right from when he arrives at the gate, he had issues because of his dressing. The gateman refused to open the gate for him. However, when he displayed a measure of boldness, the gateman had no choice but to let him go in. 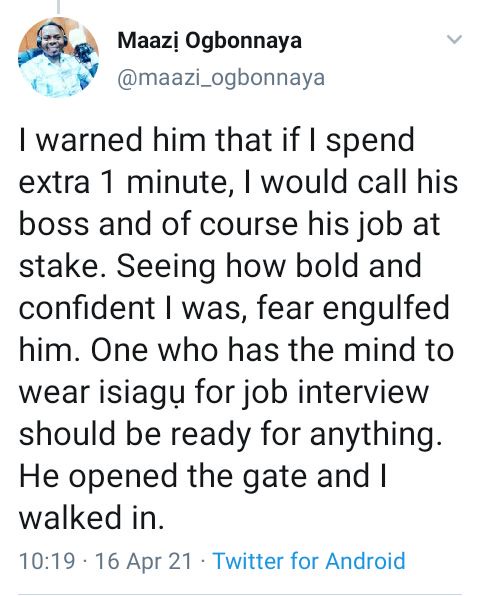 While he was inside, he was different from the rest of the interviewees who were dressed in coats and suits. The man relates that he noticed many of them murmuring and gossiping about him and about how he had no chance of getting the job. They were shaking their heads pitifully. To many, he was already disqualified. The man however said nothing to anyone. 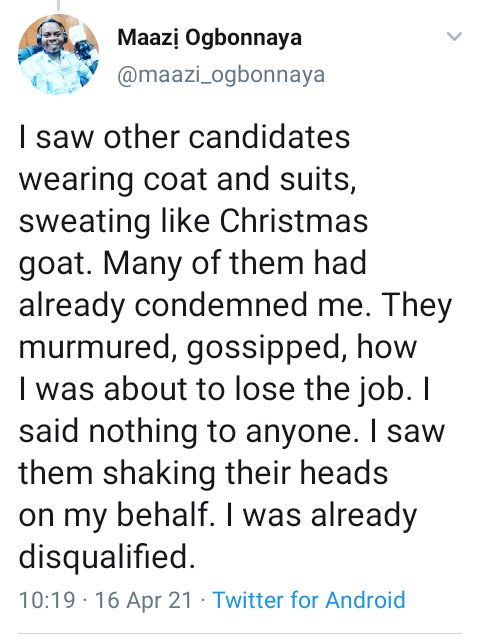 As time went by, he had to be asked by people in the company of he was for the interview. Even his fellow Igbos were laughing at him because of his attire. He and other candidates were later made to write exams after a few background check. An examiner who caught sight of him and his attire shook his head, however, he remained confident. 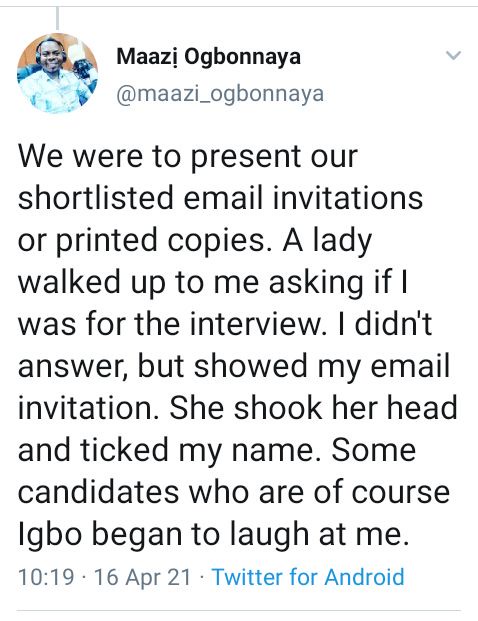 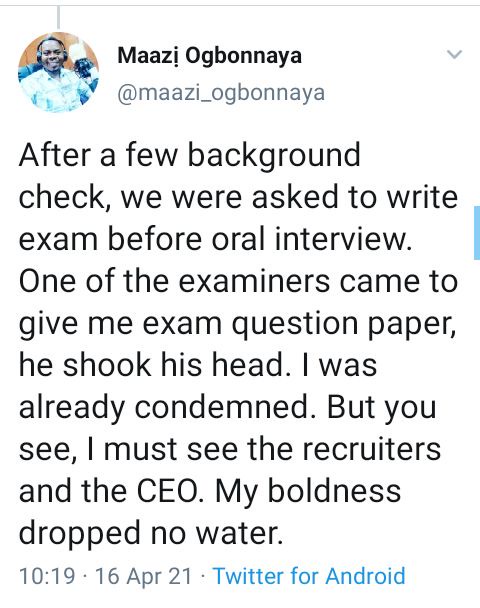 Time came for the oral interview and the interviewers were stunned. One asked him why he dressed up that way to an interview. The man replied by speaking in Igbo. He said that he is Igbo, the interviewers are Igbo and they are all Africans. One interviewer was annoyed that he answered the question in Igbo. However, the company owner was intrigued and was curious to know more about this man who showed such boldness.

The interview went on in Igbo with the man intimating the interviewers on the vision he had. The interview turned into a very conversational one with lots of laughter. He was given the job right on the spot and was even invited to have lunch with the interviewers. The man relates that he left a fulfilled man.

He also dropped a piece of advise for Africans and Nigerians in particular urging them to embrace their culture and tradition. He asked:

"Why can't Igbo interview an Igbo in Igbo? Yoruba interview Yoruba in Yoruba? Hausa interview Hausa in Hausa? Must we dress in suit? Why not wear our native dressing?" What do you think about the man's experience.

Content created and supplied by: RealAmebo (via Opera News )

If my child is abducted, I won’t keep quiet, I’ll go and knock on Aso Rock - Sheikh Gumi (Reactions)

"It is not always Satan that destroys your plan, perhaps God destroyed it"- Reno Omokri

Adamu Garba Reacted Over Gumi's Statement Regarding Buhari, Saying It's All Politics (Video).