Roman F Baca II has a CV unlike any other. He was a marine in the US Army handling a machine gun and was also deployed as the fire team leader. After leaving the army, he found himself infected with COVID-19 in New York when the pandemic was at its worst.

After fighting his way to recovery from COVID-19, he is now back to his latest guise, as a dance artist. Baca II leads a dance troupe known as Exit12 Dance Company. The artists of this group use their dance performances not merely to entertain but also to inspire people, especially army men from the past.

In the wake of the Coronavirus pandemic that has shaken the United States seriously, the former marine is again using art to keep the fighting spirit of the people vibrant. In an interview with a news channel, he talked about his experience as a veteran that also geared him up for the challenges of art. "I joined the military to face my fears. I thought that the Marines would teach me to not be afraid. When in reality, it taught me to fight fear aggressively," he said. While the challenge of dancing is not equal, in terms of danger, being on the frontline in a military conflict zone, Rafa found that it too required conquering his apprehensions and facing fears head-on.

"When I went back to dance... a different sort of fear emerged - the fear of being vulnerable, about putting my work on stage for people to see. Like the marines taught, I leaned into it (dancing)," Roman told Fox News. 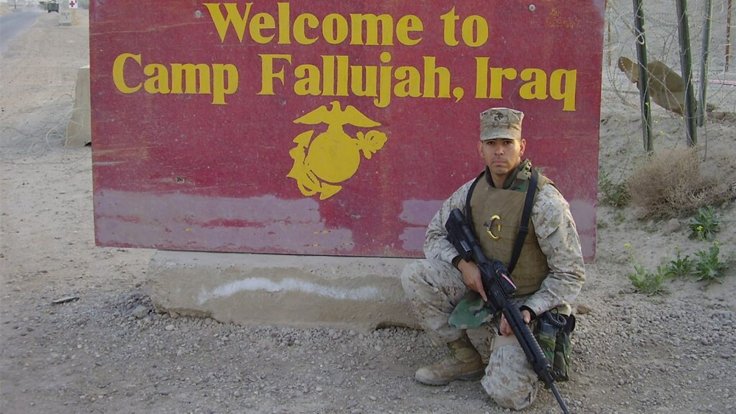 Roman during his service in Iraq Roman F Baca II

Despite facing the horrors of war, the young man found the experience of COVID hard. "COVID-19 was one of the scariest times I have lived through. I was so scared the first night of symptoms, I could not sleep," Baca said.

Here too, his experience of serving in a war zone came in handy. He decided to trust the people around him and not let panic overtake him. He fought through it and survived, unlike thousands of others who weren't so lucky. Now, having triumphed over Coronavirus, he wants to inspire others. As part of a new project, he would be conducting interactive artistic exercises with other veterans.

"During the week of the residency, Exit12 will engage in in-person and virtual creative workshops with a roster of accomplished civilian and veteran artists," He revealed. The focus of his latest work would be on examining how the experience of being a veteran passes on to the next generation.

Roman wants to use the art of dancing to fuse with the unique experience of being a veteran. "How can we connect veterans and dancers virtually to create a new artistic experience? What new work can be generated from work by prominent veteran artists?"

And while trying to help former army men, he is also interested in assisting the ordinary American who finds himself in a war of a different kind -- fighting a global pandemic which is raging on without any respite. The soldier-artist will now draw on the wisdom of those who have fought wars against visible threats to help those who are fighting one against an invisible one.