While Waiting for Our Covid-19 Results, I Locked My Family Up-TVC Presenter Narrates Experience

For the past few weeks, several audience and viewers of the regular TVC programme, 'Your View' have been asking about the vociferously vocal lady, who has been the third anchor of the breakfast show, Nyma Akashat Zibri.

Many have thought she was probably on annual leaf and by the time the wait appeared to be too long for her fans, they moved on with rest of the colleagues on the show which comes up every morning, Monday to Friday.

But on Monday July 20, Nyma made a surprised appearance in the studio and carried on with her duty as if her presence did not make any significance to the people. Before long, everyone came to term that she has been away as a result of covid-19 infection which she and her entire family survived. She was in the studio to share a piece of experience she went through in the course of wrestling with the dreaded disease.

Narrating her ordeal to Nigerians, she said her husband had been sick and she was only treating him for Malaria. The situation, rather than improving kept getting worse. He became frail and could not work on his own due to stooling.

But the use of ORX gave him a bit of strength which enabled him the strength to drive them to covid-19 testing center. On getting there, there was no any form of orderliness as people who were there for test did not in any way observe the protocol.

She had to shout and protested in order to prevent her children from having contacts with strangers. Eventually, they got into the lab where their samples were taken and they were told to return home in expectation of their results that would be ready in nine days. On getting home, she was told by relative to take her two kids to their grandmother but she considered the idea as counter-productive since all of them have been together before now. So if any of them is tested positive, there is possibility all of them will be positive.

She concluded they were in it together and decided to lock herself and the entire family in the house for self isolation till the result is out. By the time it was finally out, only two of them were tested positive while the children were negative.

Nyma confirmed she blended garlic, lemon and other items together and they were already using it before the result came. And during the process, there was a significant improvement in her husband's health.

Today, Nyma and her husband are survivors of covid-19 and she has a first hand experience to share with her viewers. 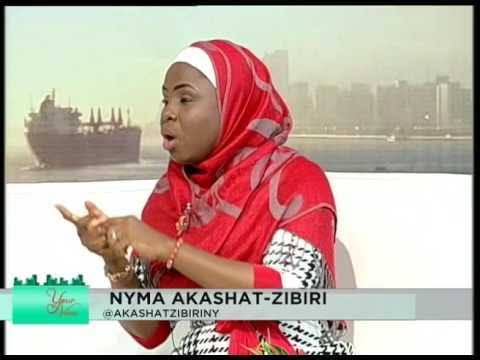 Going by her explanation, the virus spread rapidly because of lack of adequate knowledge and sensitivity about it. There are thousands of undetected carriers on the street who are not aware of their covid-19 status.

Imagine the number of people that might probably contact it through her, if she had decided to continue with her normal life during the period they were waiting for the results.

She claimed that her decision to stay indoor was her initiative after noticing the result might come out positive which it eventually happened. This is the sacrifice many Nigerians cannot pay due to appetite for survival. Nyma experience clearly gave an insight into the reason for high rate of community spreading of covid-19 in Nigeria, and while the government will need to go extra-mile to deal with the menace.

If Nyma's explanation is anything to go by, it is certain the government has not even started the fight against the pandemic. Ironically, we are all in it together.