How Taiwan became the best region at handling COVID-19 By handling well, I think it doesn’t necessarily mean by the Taiwan government. Although border closure and lockdown help to cut out the inflow as well as the outflow of infection, it's rather straight forward and obvious to any government. But once you have locally transmitted cases, the culture and people's habits contribute significantly to the statistics. So, I’d rather give the credit to the high awareness and alertness to the viral threat amongst the general public in Taiwan.

The facts behind statistics: When we look at COVID-19 statistics, there are two numbers that may be of interest. Firstly, the rate of cases over population (let’s say C/P). This reflects the efficacy of measures people took or enforced by the government to counter the virus. Secondly, the rate of death over cases (let’s abbr as D/C). This reflects the country’s healthcare capacity “and” possibly the vulnerability of particular types of genes to a particular type of virus in that region.

Lesson learned from the SARS outbreak in 2003: On March 10, 2003, the first SARS case was found in Taiwan. The country was soon hit "relatively hard" by the subsequent spread of the disease while the western world basically felt nearly nothing. Luckily the SARS in Taiwan was tamed in the summertime of the same year even though with a terrifying and tragic hospital lockdown of Taipei City Hospital of Hoping. I remember I even shipped a few N95 masks back to my parents in Taiwan from the US when I was still in Silicon Valley. Even though I used "relatively hard" for SARS, but it's in fact the same as COVID-19 this time around. There were 180 deaths out of 664 SARS cases in Taiwan which constituted literally the same insignificant rate of cases over population (23 million). However, what scared people at that time was its extremely high death over cases rate which was nearly 30% (compared to the highest death-over-cases rate of 17% to date in France, 15% in UK, and 14% in Italy, while most are in the range of 1% to 4% for COVID-19). I think the extremely high death rate effectively created psychological fear of death and forced the people in Taiwan during SARS time to recognize the life-threatening nature of the virus and became habitual mask-wearing people ever since and whenever possible. This is like the death rate of a plane crash can be nearly 100% but it doesn't mean flying on a plane is unsafe per se.

Interestingly, I did a bit of number juggling on the statistics of COVID-19 this time and found a similar fact to what happened to SARS in Taiwan. The countries (France, UK, and Italy) mentioned earlier (or see the chart below) amongst the highest death rate, tended to stay lower in cases-over-population rate. So I think the similar psychological fear of death caused by the high death rate also effectively drove these countries to take drastic measures to fight against the virus that subsequently brought down the cases-over-population rate. This may, in fact, explain the reason why the US continues to break the records of the daily cases with the death rate at the low end. The death rate can be affected by a country's healthcare capacity and people's genes of coping with the virus. As to which one contributes more is beyond my knowledge. 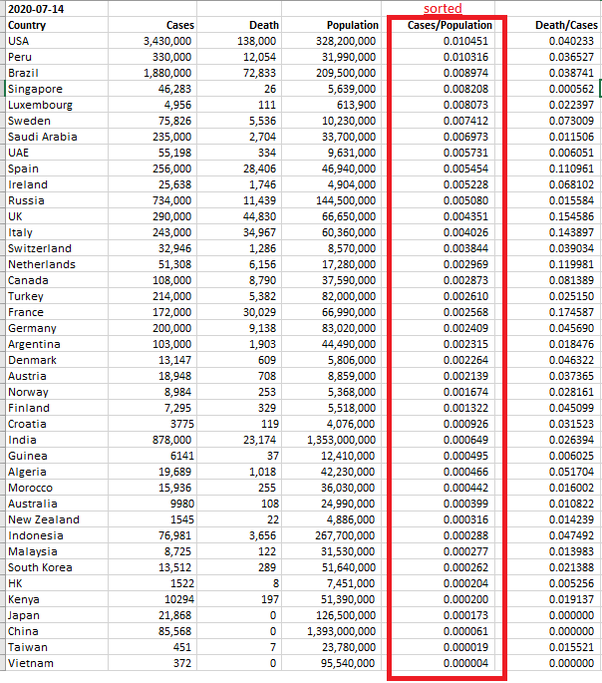 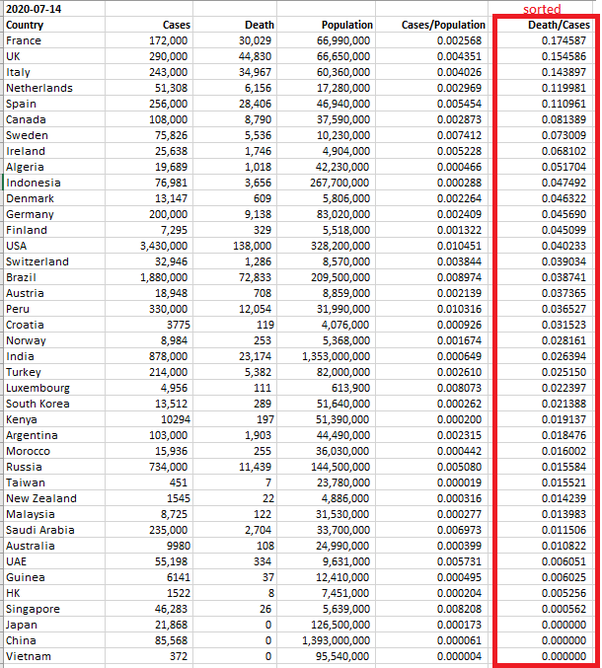 Elevated personal hygiene reminder during the outbreak: Taiwan's low case rate does not come without cost since SARS in 2003 and COVID-19 this time. Washing hands frequently and wearing masks have been proven to be the best way to ward the virus off. By washing hands, I really mean washing hands frequently. Many people that I know of during this period keep bottles of alcohol spray at home and also carry a small bottle along when they go out. Also, keep at least 20 masks in inventory constantly. The ultraviolet disinfector can be easily sold out (luckily, I managed to buy one at home). The first thing people do when they get home is to disinfect hands then take off outer clothes. Then disinfect hands the 2nd time in case the clothes were contaminated with the virus. Without doing so, if you immediately grab finger food such as chips, pizza, or sandwiches, the virus on the contaminated hands can happily go down along the esophagus with the delicious food. These sound all too paranoid at first, but as you see the still shockingly rising cases in some countries, you feel no regret doing so anyway.

Low-cost, convenient, and high-quality healthcare system in Taiwan helps: This is different from how advanced a country’s medical research is. I’m sure many major western countries take the lead in this area without any doubt. Low cost means low medical treatment fees, not low insurance premiums. Of course, the premium comes from your paycheck if you have a job (USD 100~200/month) depending on if you are single or head of household). However, if you are not employed, you pay a really low nominal fee (about USD 25/month) but still receive the same level of medical services. Thanks to the frontline medical workers under this healthcare system with a high density of medical providers (clinics and hospitals), people are able to receive immediate medical attention without waiting as soon as you get sick with almost any kind of illness, mild or severe.

Conclusion: People's awareness and alertness to the virus threat, the level of measures taken against the virus, the country's healthcare capacity, and lastly the genes may all play a role in a fight to the COVID-19 and probably any pandemic in the future.