By Abimich (self media writer) | 1 year ago

Death is painful especially when it takes someone close to you. We are humans and it is part of our characteristics, it is bound to happen, we can't escape it. I believe what we need to do is to make the best use of life while alive just like the first-ever female combat helicopter pilot ( Tolulope Arotile) did. She broke records and gave her quota to the nation.

Right from childhood, she has been very hard-working determined to become a NAF officer ( Nigeria Air Force ). She comes from the ijumu local government area of Kogi state. Tolulope Oluwatoyin Arotile was born on 13 December 1995 which means she is going to clock 25 this December. 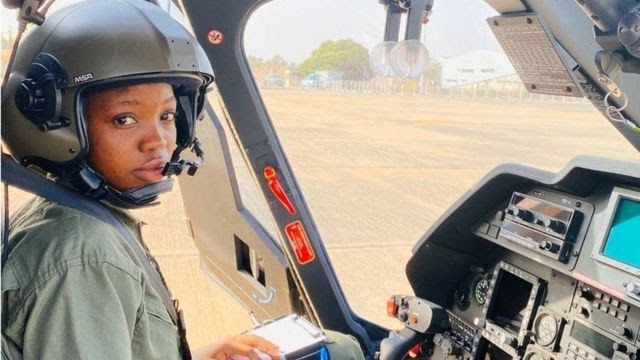 The Air Force officer attended Air Force primary school, Kaduna from 2000-2005 and proceeded to the Air Force secondary school where she joined the cadet force to show her love for the military.

According to one of her friends Musa Mohammed who studied chemistry at Usman Danfodio Sokoto said she has always wanted to join the military. They both went to the same primary school, they were seatmates and had stayed in touch ever since then.

Their last discussion was about the issue of coronavirus in Kano state when Musa posted about it on his social media handle.

He had always teased her about her height in which she always responds that she will grow taller.

She studied mathematics at the Nigeria defense academy (NDA) and was a member of the 64 regular courses on 22 September 2012.

She has commissioned the Nigerian Air Force on 16 September 2017 as a member of the Nigerian defense academy regular course 64.

She holds a commercial pilot license and also underwent tactical flying training for the Agusta 109 power attack helicopter in Italy.

She has been very instrumental in the effort to rid the Nigerian north-central region of armed by flying a various combat mission.

Her service to Nigeria was short. Her job has been stereotyped to be a man's job but she made history.

She will forever be remembered.