By JEEmmanuel (self media writer) | 1 year ago

The 75-year-old Amherst Martin Gugino, New York resident at the public protest against police racial treatment of blacks was seen pushed to the ground at Buffalo City Hall by the Buffalo emergency response officer. According to the usatoday.com, “Gugino stumbled back and then fell to the ground, his head hitting the sidewalk. Blood pooled around the back of his head almost immediately. This resulted in a wide outcry by the public which saw the immediate suspension of the two officers involved in the act. 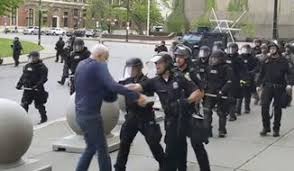 The Erie County District Attorney has announced that is office is looking into the incident to determine if criminal action is warranted.

In solidarity, the entire members of the department's Emergency Response Team resigned from the unit, which response to riots and other crowd control situations, according to the outlets. They believe that the two officers who were suspended were carrying out orders given to them. The Buffalo News reported that the resignation did not affect their services; “The Emergency Response Team members have not quit the police department, but have stepped down from the tactical unit”.

Content created and supplied by: JEEmmanuel (via Opera News )