Police Chief Of Atlanta Steps Down As An Officer, Shoots Another Black Man dead At Wendy Drive.

By Warrys (self media writer) | 1 year ago

Atalanta police chief resign on Saturday amid controversy about a black man who was shot dead by cops in a struggle after a druken driving at a fast food drive.

Rayshard Brooks had grab an officers Taser and was fleeing away form the cops before they shot him, said authorities. The shooting is the latest flash point of Atalanta protest against racism.

"I don't believe this was a justified use of deadly force and has called for the immediate termination of the officer" this statement was said by the Atalanta Mayor Keisha Lance Bottoms.

"Shields has offered to immediately step aside as police officer so that the city may move forward in rebuilding the trust so desperate needed throughout our community" the mayor said .

The Georgia Bureau of investigation said in a report that the officers who haven't been named, were dispatched to around 10:30 pm on Friday to a Wendy restaurant. where people reported that a man later identified as Brooks was sleeping in his car in the drive and was forcing other customers to drive around him.

After Brooks failed a field sobriety test the officers attempted to place in custody.

Video revealed that during struggle with the police, Brook obtained one officers Taser and he began to flee from the scene the" GBI said.

The officers pursue Brooks on foot and during the chase Brooks turns and pointed the Taser at the officers, Then the officers fired his weapon striking Brooks.

The cop has been put to administrative leave. 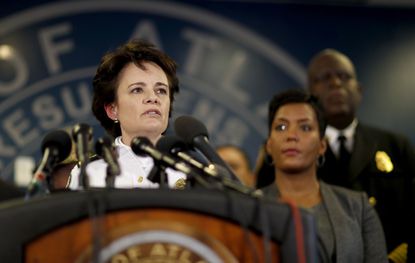 Content created and supplied by: Warrys (via Opera News )