By Equanimous (self media writer) | 2 years ago

An Edo Man named Moses, a graduate of the department of Mechanical Engineering of Auchi Polytechnic, Edo State has confessed to the Police that he beheaded his close friend, Abuchi Wisdom Nwachukwu during a night shift at a table water company where they both worked. 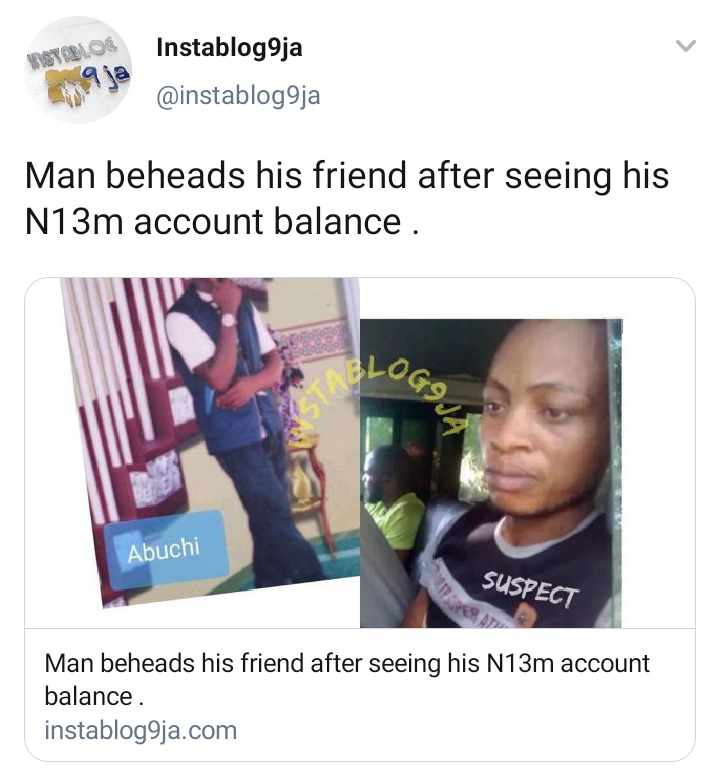 Moses opened up about the gruesome murder to the IRT operatives after he was apprehended, he said the thought of killing Wisdom dominated his mind after he had showed him his account balance which had a huge sum of 13million Naira.

According to Moses; "Nwachukwu told me about his brother who lives in South Africa and how he has been sending money to build his house for him. He showed me the alert for the N13 million his brother had just sent to him, saying that he would be travelling to his village to carry out the project. I felt jealous and I decided to steal the money.

Since we were friends, I tricked him and collected his phone password. I went through it and found the PIN for his ATM card. I killed him on January 8, 2020. I stayed in several hotels and was carrying different women, but Nwachukwu’s spirit started disturbing me."

Moses with the help of internet fraudsters withdrew the money from wisdom's account, he's been spending the money on women and moving from one hotel to another. To round it up, Moses revealed that the spirit of the deceased have always tormented him which makes people run away from him.

Content created and supplied by: Equanimous (via Opera News )