The day my dad almost killed my junior brother (Fiction)

By TOPEDOSKI (self media writer) | 2 years ago 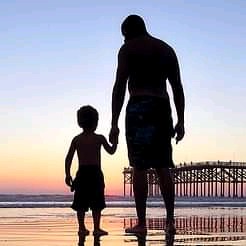 It was a cold Sunday evening after we had our dinner, there was nothing to do so I sat in in the sitting room where my Dad, Mom and my immediate junior brother was also sitting. Our last born who is also the third born was no where to be found, I guess he was outside playing with his friend called Destiny (our neighbor's son).

My dad was sitting on a single couch opposite me, he was pressing his phone. I was sitting on a couch that could contain three people, despite my slim stature I was able to contain the couch, yes because I was lying down. He came across a news on his phone, then he said:

"God forbid, I can't do this, as a father you have to protect your children, I don't see any reason for using cane on children."

Yes my dad said that, and it's true because he has never used cane on us, but he's the type that loves punishment like "Pick pin", " Agama lizard", "Ride Machine", "Frog Jump" And other type of corporal punishment. My dad was just shouting about how he will never use his hand to hit any of his children (The truth is that, he was right because he has never hit me with his hand). Right there I began to see my mom as the devil. Because she's the type that can hit you with anything she finds. I remember the time I got my mom angry then she threw her phone at me, being Jet Li I was able to doge it and the phone hit the wall and you know what will happen to the phone. I was helping her to gather the scattered phone when she used her high hill to stone me and being the Jackie Chan I was, I dodged it again but this time my dad was coming from the kitchen with his favorite food and the shoe hit him on his head and the food fell on the floor scattering the glass plate. Hmm that's a story for another day.

With all these said, back to the sitting room my dad kept on preaching on how a good parent should never in any condition hit a child. I was thirsty so I went to the kitchen to get water, and on my way to the kitchen we heard a loud shout, that is definitely my junior brother. In my mind I was saying what kind of play is this children playing? So I bounced to the kitchen to get my water but before I could get to the kitchen my mother shouted from outside too. Okay this is is serious and being the flash I was, I went outside and the movie I saw was not funny.

My junior brother somehow touched a naked cable and my little brother was electrocuted and he couldn't move but the mind blowing thing is that my mom too was holding his hand and both of them where posing like they want to take a picture together. My dad was shocked he was running up and down like someone that's high on cheap drugs, he was talking to himself (I guess praying) and seems to be looking for something.

As a science student I went into thinking mode all I have to do is to remove the fuse from the socket but the problem is the room in which the wire source came from was locked the man was not around. Okay it has to be from the main box that controls the electricity of the whole compound. So I rushed towards the gate man's house because that's where it was. When I got there I have not time to think so I just remove all the fuse I found. And on removing the third fuse the whole compound was in darkness but still I removed the last one too, to avoid story that touches.

So I rushed back to where my mother and my brother where electrocuted and found them sitting on a staircase and people where fanning them, mama Destiny came rushing with Peak milk, and my dad standing there with a two by two plank. Immediately I saw the plank, I recalled when one of my friend was saying that any time someone is electrocuted that you should use plank on that person. So I shouted daddy what do you want to use this plank for? Then he said;

I want to use the plank to flog your brother .

Ever since then I stopped trusting him. 😁

It's exactly a year this incident happened

Exactly one year I stopped trusting him

It is exactly one year God used me to save my brother's life.

Please don't forget to follow me on Opera News by scrolling up and clicking on the follow button.

Content created and supplied by: TOPEDOSKI (via Opera News )