Bolt From The Blue Makes Indonesian Coffin Maker a Millionaire; He Wants to Have a Daughter Now

It is believed that if you wish something to a falling star, it comes true. That ancient belief hasn't done any good for most but a fallen space rock has changed a man's fortune in Indonesia. Sounds unbelievable, right? But that exactly what happened to Josua Hutagalung.

In what was a lucky escape for Hutagalung, he managed to score big, by selling the rock to a collector and became an instant millionaire. The 33-year-old, a coffin maker by profession, saw a football-sized meteor crashing through the roof near his living room in August 2020.

Hutagalung, the resident of Kolang (North Sumatra), escaped unscathed and found the 4.5 billion years old space rock still emitting smoke. When the meteor cooled down, he and his wife dug the 2.2 kilograms rock out with a hoe and took it home, with no hints that his life was about to change. 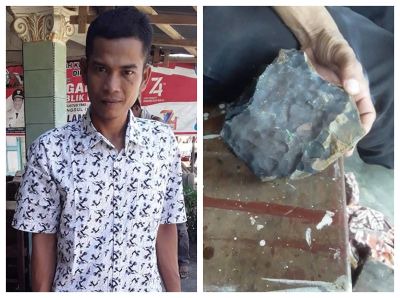 "I was working on a coffin near the street in front of my house when I heard a booming sound that made my house shake. It was as if a tree had fallen on us. It was too hot to pick up so my wife dug it out with a hoe and we took it inside," Hutagalung said.

The meteorite turned out to be a valuable one. Classified as CM1/2 carbonaceous Chondrite, the meteorite is extremely unique as it contains rare amino acids and primordial elements that probably were responsible for life on Earth. While such meteorites are valuable for scientists, those are also in demand amongst collectors, who pay thousands to millions of dollars to get their hands on such rocks.

For example, iron-nickel pallasite with olivine crystals embedded is the most valuable. One such meteorite was found in Fukang, China in 2000 and the one-kilogram specimen was valued at $1.9 million. Another specimen, named Brenham Meteorite Main Mass, weighing 1.4 pounds (650 grams) was valued at $1.2 million. The most valuable meteorite was found in Kansas, the U.S. in 2005.

Coming back to Hutagalung's meteorite specimen, a collector and space rock expert Jared Collins was alerted about it at his home in Bali. The American rushed to Hutagalung's village to collect the specimen with whatever money he could arrange.

"My phone lit up with crazy offers for me to jump on a plane and buy the meteorite. It was in the middle of the Covid crisis and frankly it was a toss-up between buying the rock for myself or working with scientists and collectors in the U.S," Collins told the Sun.

Hutagalung turned out to be a "canny negotiator" and sold the meteorites for an undisclosed amount. Collins sent the meteorite to the U.S. where an American collector bought and stored it in liquid nitrogen at Arizona State University's Centre for Meteorite Studies. Other fragments of the meteor were sold to another collector who put them on sale on eBay for £757 per gram, valuing the rock at around $1.8 million.

As for Hutagalung, he got an undisclosed amount that was worth 30 years of his salary by selling the meteorite. But it was enough for him to retire from his daily job of making coffins and could build a church in his village. The father of three children now wants to have a daughter. "I have also always wanted a daughter, and I hope this is a sign that I will be lucky enough now to have one," he said.