By GoldenRald (self media writer) | 2 years ago 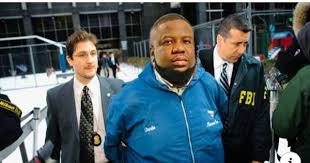 The arrest of popular Nigerian big boy who go by the name Hushpuppi has generated lots of reactions and reviews since his arrest. Hushpuppi accused of internet fraud which includes creating fake accounts on social media and hacking corporate emails to trick clients into making money transfers to the gang’s bank accounts.

Hushpuppi and his gang were caught after weeks of investigation by the US Secret Service, following the alarm raised in May about a crime ring of suspected Nigerians who broke into the personal information of citizens and used false unemployment claims to cart away hundreds of millions of dollars reserved to help jobless American people.

The gang were confiscaticated of incriminating documents pertaining to a well-planned international fraud, worth Dh1.6 billion(N168 billion). Some other items and documents confiscated are 13 luxury cars, valued at an estimated $6.8million, 119,580 “fraud files” as well as addresses of more than 1.92 million victims. Some Social media users have taken to the internet to air their disbelief and anger on Hushpuppi and his gang.

"My friend's Dad got defrauded of a sum close to 22 million naira in 2010. Man had stroke, got hospitalised, deteriorated day after day till he died. This was a very strong and successful business man. See, Hushpuppi & his cohorts should rot in jail." It’s one thing to be a thief.It’s another thing to be stupid.It’s a disaster to be a stupid thief. 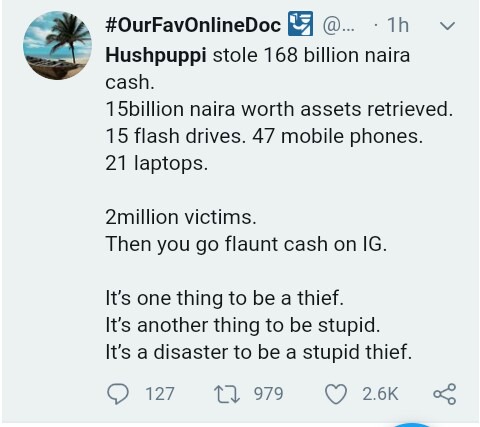 Hushpuppi comes from a society where thieves are celebrated. Baba comes from a country where questioning sources of wealth is called " bad belle".. Somebody drove 2 Bullion Vans into his home and EFCC unlooked.. Let's not start with the yahoo boys in House of reps.. Someone said Hushpuppi might get an offer to work for the FBI or CIA since he's a very good hacker. I believe so too. All he needs is a CV review from Ogbeni Dipo. 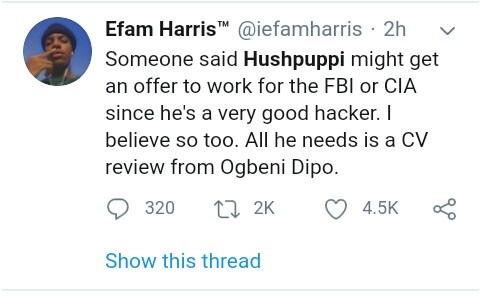 Mompha was actually quite "lucky" to be arrested in Nigeria. He is somewhere in Banana Island chilling, doing skits, entertaining guests.

Hushpuppi and Invictus will wish the EFCC arrested them. There is no way they're escaping justice from the FBI and Dubai Police. Jail straight Hushpuppi could have been enjoying his money as a lowkey person but he had to prove himself on social media, you won’t see drug barons that own cartels worldwide flaunting like him.

Truly he was the cause of his own downfall. Dubai Police did a nice job in this Hushpuppi and crew arrest documentary.

Did you hear the figures????

Nigerian Police left the WhatsApp group. They'd rather arrest without evidence and extort you for carrying Laptop. If you spent 2 million naira daily without gaining anything else, the money that Hushpuppi stole would be able to last you for 100 years. Bruh. 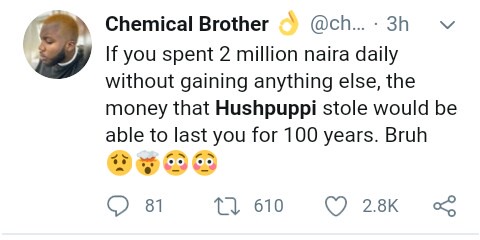 Content created and supplied by: GoldenRald (via Opera News )