By educateyourself (self media writer) | 2 years ago

In the recent days of criminality and high spate of banditry in Nigeria, the issue of armed robbery would not be new to even a baby of today in Nigeria. Prior before what it is now in Nigeria, there have been some persons and notable names that have kept people on their heels or either left them to sleep with an eye open. These people were of national concern to the government and entered their names in the most wanted lists of security agencies.

Such names would include Lawrence Anini, who was a terror in the old Bendel state in the 80s, Shina Rambo a former bandit who terrorized Western Nigeria in the 90s, Monday Osunbor who was of Anini’s pedigree. He was also a notable name in the 80s, Okwudili Ndiwe aka “Derico Nwamama” a street urchin who rose to become a ruthless armed robber in and outside Onitsha. His reigns came to an end after he was captured by the infamous “Bakassi boys” in 2001. And in 2017, the popular name Chukwudi Onuamadike aka Evans the billionaire kidnapper became the home name as the media always had some new updates around his arrest and investigations. He is still tried in court till this moment. In the list of this notoriety would have Isiaka Busari, aka Mighty Joe; a man who his name in the annals of Nigerian history would be remembered for being a great terror.

Isiaka Busari would take over from his boss and a notable kingpin of armed robbers in Nigeria, Ishola Oyenusi, not so long after his execution. Nigerians where reviving from the civil war and with the death of Oyenusi, it was a tale of relief, but little did they know that one even deadlier than who they’ve known was rising.

And here comes the story of Isiaka Busari.

Mighty Joe’s operation was majorly in Lagos where he was given birth to and raised. In 1936, he was born to economic strangulating parents who were both striving for survival. Mighty Joe lived in the midst of his parents and other four siblings.

Due to stark poverty, he lost three of his siblings living him with an only surviving sister. Mighty Joe had no option rather than quitting school after Standard 4, due to his father’s inability to fund his education. Mighty Joe began to develop interest in boxing against his parents’ will and would often sneak out from the house for boxing.

He parted from his mother to fend for himself shortly after the demise of his father. With the need to make money, Mighty Joe left the boxing space and moved towards buying and selling market which he often got his goods from the port. It was in this process that Mighty Joe began to learn how to steal and outwitting his fellow traders after joining Ishola Oyenusi’s gang.

Mighty Joe’s gang was made up of ex-soldiers who were sacked and being skilled with the handling of guns, they laid siege and held the nation at ransom which most of their operations took place in Lagos and the entire South West. They robbed and killed recklessly abandoning their victims.

Several accounts had it that Mighty Joe was greatly dreaded by women. In one of the accounts, it is said that he harassed a young lady and poked her eyes with a lit cigarette he had in his mouth, leaving the poor woman blind.

Mighty Joe’s operation was quite deadlier than his predecessor Oyenusi. His style was to operate at any time he felt like and snapping life out of people meant nothing to him. The then Federal Capital Territory, Lagos felt his terror most especially around Mushin which was where he lived and traded.

His reign would be famed from 1971, after the death of his boss to 1973 when he was nabbed after robbing a hotel bar attendant, Michael Osayunana, of the sum of N10. 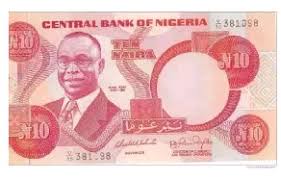 N10 is not what we would imagine it to be today; it had high value, besides, at that time, Nigeria was changing from Pounds to Naira.

There are different stories to his arrest, as what had a beginning in the face of the earth must have an end – not to mention when it is an evil course.

But the fact remains that as dramatic as his operations were, so was his arrest too. He was caught when someone he had earlier robbed recognized him and pointed him out to the police; he was arrested without any fights. This countered his earlier boasts of being untouchable by any man born of a woman due to his strong beliefs in his juju powers.

However, some claims where of the opinion that Mighty Joe was arrested on trumped-up charges, claiming he was not the great and notorious robber the police had painted him to be. Some of such divergent opinions believed that he was just a common street thug rather than the robber portrayed.

Such people claim further that Nigeria’s biggest newspaper at that time, the Daily Times, which was partly owned by both the Federal Government and the Alakija family of Mushin and Mighty Joe was said to have a tussle with this prominent family who then set him up and ensured he was executed.

While in prison and awaited his doom’s day, Mighty Joe converted to Islam and prayed fervently. He also offered prayers that his execution be reverted, but that never happened. 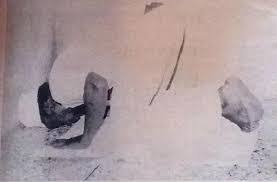 In June 6, 1973, just like his Master Oyenusi, Mighty Joe was journeyed to the stakes in a VIP ride from Kirikiri Prisons to the Bar Beach in a police van escorted by six lorry loads of tough looking anti-riot policemen.

Many commercial bikes numbering in hundreds were cleared out of the road as the police siren announced the approach of the leader of the underground men. 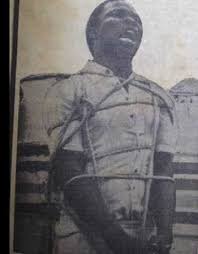 Isiaka Busari tied to a stake at Bar Beach

Alongside Mighty Joe was Bashiru Fatola his sidekick, a former soldier. The crowd jeered in joy as another site seeing would be played out at the Bar Beach.

This was to be Mighty Joe’s last famous words after he had been tied to the stake and asked to say his last words:

“May God bless everybody, both my friends and enemies.

Tell my wife, my mother and in-law to keep fit.”

His body was lay waste by the hail of bullets. 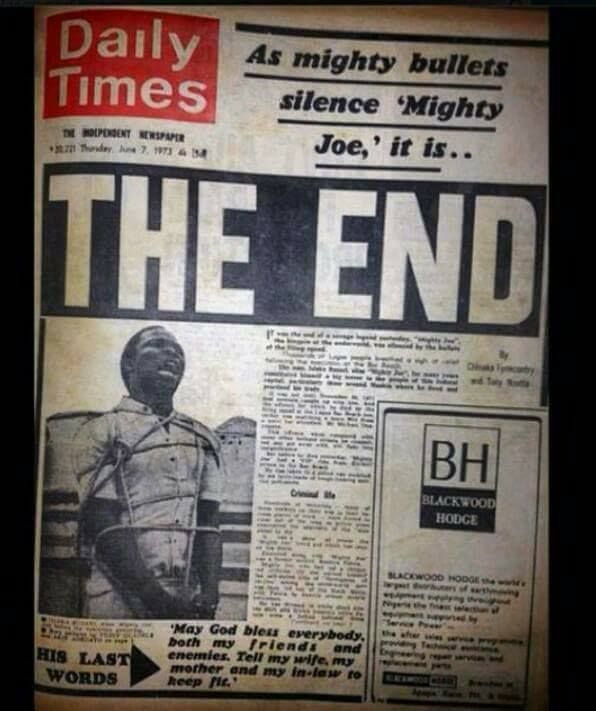 Content created and supplied by: educateyourself (via Opera News )