By GlobalSafety&Events (self media writer) | 1 year ago

It has been discovered how two men living in the Eastern part of the country were caught after stealing little children between the ages 2 to 3-years old. Two persons who are suspected to be child traffickers have been caught by officers of the Rapid Response Squad in Enugu State, for stealing little children and selling them off to a woman based in Port Harcourt River's State. 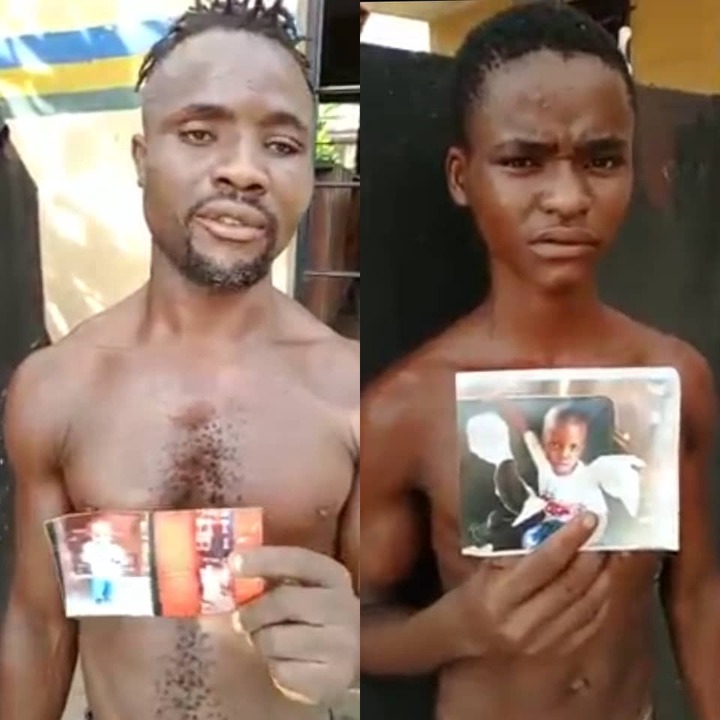 The two suspects who are named Ekene Duru, and his accomplice Chinonso Sylvanus, made an open confession to officers of the Enugu State Police Command while they were being interrogated, mentioning that the woman who buys the kids from them usually sells them off to couples who are yet to have their own kids.

During Ekene's confession, he stated that he goes about in search of little children who are as little as 2-years old, mainly in Umuochala, around Ariaria - Aba, in Abia State. When Ekene was asked how he carried out his operations, he narrated that he usually buys them biscuits or cooked eggs before boarding a tricycle or motorcycle, and while on his journey nobody stops him to question him about whom the kids belonged to because the children themselves do not cry.

Meanwhile, his accomplice Chinonso Sylvanus, alleged that Ekene is the one who contracted him into stealing these little kids after claiming that he works for Ekene and he is his boss. Chinonso, who refers to Ekene as his (Oga), explained that he had stolen a male child from his mother's workshop where she makes hair as a hairdresser, and further said that he just entered the shop and took him with no one asking him question despite the fact that people saw him with the child, because the mother knows him.

Chinonso claimed that he stole the child and took the boy to his (Oga) who gave him 50,000 Naira, which he used immediately to run to Owerri since his boss instructed him to either relocate to Owerri or Port Harcourt, ending his statement by adding that his boss told him the children were being sold to couples who are desperate to have kids.

You can view the video here.

What do you think about these two and what do you think parents need to do to secure their children from people like this? Please kindly share your thoughts and do not forget to like the article and follow me for more, thanks.

Content created and supplied by: GlobalSafety&Events (via Opera News )