#EndSARS protest has been opposed by some Northern Youths 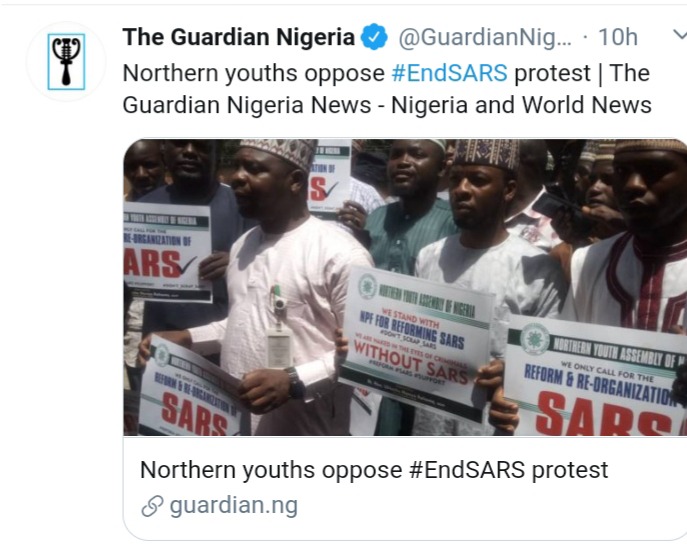 According to them, SARS should not be scrap out because, SARS has been fishing out criminals and hoodlums who have been terrorising this Country, and for that reason, shouldn't be scrapped out.

The Special Anti-Robbery Squad was a Nigerian Police Force unit under the Force Criminal Investigation and Intelligence Department headed by the Deputy Inspector General of Police Anthony Ogbizi. It was disbanded on October 11, 2020 following a widespread protest from Nigerians home and abroad. Northern Youth, opposes the Nation wild and international protest asking Government to End SARS.

Recalled that the reason why the Nigerian Youths both locally and internationally staged the protest #EndSars was because Federal Special Anti-Robbery Squad (SARS), was widely accused of unlawful arrests, torture and even murder, but has since broadened to include all police forces.

It was also because of police oppression and brutality in Nigeria. The protests started as a social media campaign using the hashtag #EndSars to demand for Nigeria's government to scrap and end the deployment of Nigeria Police Force Special Anti-Robbery Squad, popularly known as SARS.

The Guardian is an independent daily newspaper published in Lagos, Nigeria, by Guardian Newspapers Limited.

Content created and supplied by: BigJohn10 (via Opera News )