Remember This 79 Year Old Murderer Who Has Been In Prison Since He Was 16, Refused Parole Offer.

By fasthint (self media writer) | 1 year ago

Wonders shall never end, there's nothing you won't see under heaven again, there are lots of things that do is happening under heaven. 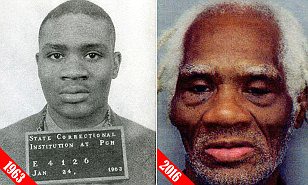 This same man who was accused of crime 63 years ago whose name go by Joseph Ligon, even though he denied the crime and still claimed to be innocent of the crime he was accused of.

Due to the longetivity of the terms he has served, the government has offered parole on several occasions but he turned it down.

Joseph Ligon is the oldest prison inmate who was incarcerated as a juvenile and given a life sentence for his involvement in the stabbing deaths of two men in Philadelphia 63 years ago, according to The Philadelphia Inquirer.

Even though he has denied the crime in many occasions and established that if he had committed that same Offence, He would have killed himself in the prison since all the years he has spent there.

In his word, he doesn't want a parole but just to be released bases on his Innocence. We pray he is released very soon.

Kindly follow me to receive more updates on the news, I promised to follow you back Asap.