By Bigmoses (self media writer) | 2 years ago

News of the release of Mr magu, the ex EFCC boss who was arrested and detained recently for crimes relating to financial issues. 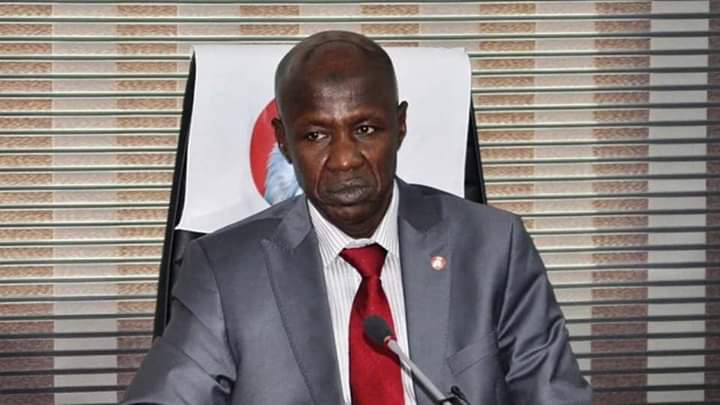 According to Punch.ng, he was released this evening evening (15, July, 2020) after been arrested and detailed for days. Mr Magu was arrested last week monday and has been facing presidential panel investigating the alleged corruption practice and insubordination charged against him by Nigeria's minister of justice Mr Abubakar Malami.

Don't forget that after he was arrested, combined team of DSS and the police visited his residence in Abuja for a thorough search. News also broke out that his private home in Karu and his official hoise in Maitama are under siege by the secusom operatives. Now that the suspended chairman of the anti-graft agency, EFCC, Ibrahim Magu, has been freed these are five facts every Nigerians most know about him.

1. He was released but not cleared of all charges against him: He is now freed but not all clear of below charges:

1. Insubordination to the office of the AGF

3. Refusal to unfreeze 7billion property even though the court has ordered it release, all in favor of ex executive director a bank.

4. Magu was alleged to have declared that he 539billion naira instead of 504 billion naira.

2. His suspension as not been lifted: Mr Ibrahim was suspended on Tuesday over gross financial misconducts attributed to his position as the boss of a working anti graft body, his release doesn't mean that the suspension has been lifted.

3. The trust has reduced: when he assume the position of EFCC many Nigerians trusted him in the fight against corruption but now that he has pending case cases relating to corrupt, do you think Nigerians will still trust him with task?

4. Arrested now become arrested: EFCC is a body of law that empower it officials to order the arrest and detain anybody found wanting of financial crimes in Nigeria. But now, the arrested was arrested.

5. Mr. Mohammed Umar is now the acting chairman of EFCC.

In any decision we make, it is always important for us to think about the outcome. To be sincere, corrupt practices seen among EFCC official is a big slap to the "war against corruption in Nigeria ".