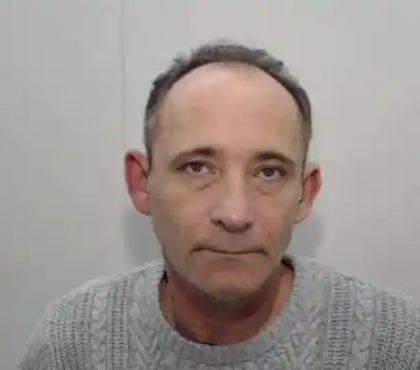 A man has been jailed for fifteen years for breaking into homes and sexually assaulting two young girls and a woman in separate attacks.

Jason Bursk, 51, from Bury, Manchester, sneaked into a home through the back door and entered the bedroom, where he sexually assaulted and attempted to rape a young girl in her bedroom.

Her sister, who was also in the room, then heard and pushed him away, a court heard.

CCTV footage released by police shows Bursk stopping in front of a house after a night out in Manchester.

He was dropped off by a taxi in front of the house in Albion Street and is seen looking into the windows and trying the front door.

After trying and failing to get into the house, he is then seen crossing the road to attempt to enter another house.

He is seen on CCTV peering through the window before gaining entry through the back door.

Further CCTV footage showed the "deviant sexual predator" pulling his trousers up inside the property and fastening them as he ran away.

In another incident, Bursk sexually assaulted a woman in her late 70s as she slept in her home.

The elderly victim awoke to find him in her bedroom after he had turned the lights off, the court heard.

Bursk, an Uber and taxi driver from Radcliffe in Bury, was jailed after he pleaded guilty to 11 offences including attempted rape, sexual assault and trespass with intent to commit a sexual offences.

He also attempted to trespass several other homes with the intention of committing sexual acts, said police.

Greater Manchester Police said after Bursk was sentenced: "The court heard that after a night out in Manchester, Bursk was dropped off by a taxi. He was seen on CCTV stopping in front of a house and looking through the window before trying the front door.

"After being unable to enter the house, he walked across the road and tried the door of another house. He was next seen on CCTV peering through the rear window of the house before gaining entry through the back door.

"Bursk then proceeded to go to one of the bedrooms where he began to sexually assault and attempted to rape the young girl.

"He only left the room after being disturbed by the young girl’s sister who awoke in a bed next to her."

After pleading guilty on Friday 17 January 2020 to 11 offences, Bursk was sentenced today (Wednesday 15 July 2020) to 15 years jail with an additional five years on extended licence.

He was convicted of the following offences:

-    Four counts of trespass with intent to commit a sexual offence;

-    Three counts of attempting to trespass with intent to commit a sexual offence;

-    One count of attempted rape of a child;

Bursk was captured on CCTV leaving his victim's home

Three CCTV clips were released by police after Bursk was jailed.

One shows him walking down the road shortly before he attacked the young girl in her bed in Radcliffe last November, and later pulling up and fastening his trousers after the sexual assault and attempted rape.

Another clip shows him out drinking with pals in Manchester city centre earlier in the night.

And the third clip shows him entering a stranger's property during the night and being locked in by the occupant, who was alerted by the alarm on her doorbell, on April 5, 2019.

He was disturbed by the occupant's two dogs, unlocked the door and fled.

Birsk was seen on CCTV pulling up his trousers after the assault. Picture: Greater Manchester Police

Senior Investigating Officer, Detective Superintendent Howard Millington, said: “I would firstly like to pay tribute to the victims of these horrific sexual ordeals who have shown great levels of dignity, co-operation and patience during this whole process to finally get the justice that they deserve.

“They have been through harrowing circumstances but have shown admirable strength and courage to ensure that this man has received the justice he deserves.

“In addition I want to thank the victims’ families for their unwavering support during this investigation and also our local partner agencies and specialist officers who have provided excellent support for the victims throughout.

“This was a meticulous investigation which has led to this result and I would particularly like to thank my team on this case including DS Andy Wright and his detectives in Bury CID, along with specialist crime colleagues, and to the CPS for the lengths they all went to, so that Bursk has been prosecuted for the full scale of his offending.

“Jason Bursk is an extremely dangerous sexual predator who would seek opportunities to commit shocking sexual acts on innocent members of the public who were vulnerable due to their age and I am now satisfied that Radcliffe is a much safer place without this individual roaming our streets.

“The sexual offending towards two young girls and an elderly lady will have shocked our community and there’s no doubt Bursk endeavoured for further gross activity to take place but was thankfully unable to do so, due to this investigation.

“This case epitomises our commitment in Greater Manchester Police to ensuring that all potential victims of serious crimes of this nature get justice no matter what. It is important that anyone who has been affected by this case contacts the police with the knowledge that information will be treated with the strictest confidence."

The Supreme Court will make the ruling on Wednesday morning

Supreme Court to rule on use of paedophile hunter groupevidence

Dawn Sturgess had died in hospital in Salisbury, Wiltshire, during the summer of 2018

High Court asked to review scope of inquest into Novichokvictim

Both of the victims were taken to hospital following the incident

The sentence for assaulting an emergency worker could be doubled

Plan to double maximum sentence for attacks on 999 workers.