By Thrivewithola (self media writer) | 2 years ago

There is absolutely no doubt that the Nigerian Economy has been worst hit by the COVID19 Pandemic thereby making lives difficult for the citizens.

But, we cannot use that as an opportunity to engage in criminal activities all in the name of wanting to take care of one's needs. 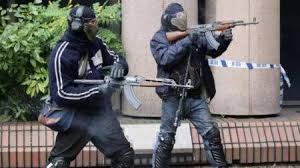 Late yesterday, police officers in Ogun State Police Command, successfully arrested two suspected robbers, who are alleged to be specialists in snatching motorcycles from their owners at different gunpoint in Ijebu-Ode and its environs.

The two robbers were single handedly apprehended while on the verge of snatching a motorcycle after dispossessing two Okada riders of their motorcycles.

The Police Public Relations Officer in the state, Abimbola Oyeyemi, made it known that the suspects are Joshua Michael, who is 27years old, and Emeka Nwanga who is just 26years of age. 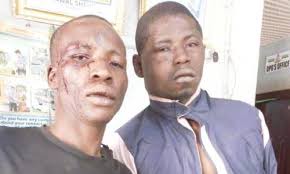 They were both arrested following a distress call received by the Divisional Police Officer, Ilese-Ijebu, SP Olusesi Kayode in Ogun state.

According Abimbola Oyeyemi, He disclosed that the police division received first hand information that armed robbers were on the move to rob an okada owner of his motorcycle around the Ikangba Estate, Ijebu-Ode in Ogun State. 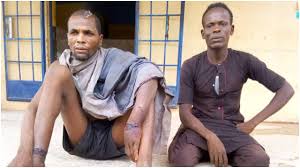 The Police Public Relations Officer in the state disclosed that, “Upon the distress call, the Divisional Police Officer, Superintendent Olusesi Kayode, instantly ordered the anti-robbery squad to visit the scene. 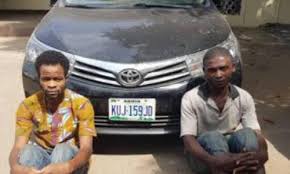 He however said, immediately the armed robbers saw the policemen approaching the scene of incidence, the suspects fled away, though they were heavily chased and arrested with the intervention of members of the public.

In furtherance, the PPRO said “The motorcyclist and his motorcycle were rescued from the two armed robbers as well as recovering locally-made double-barrelled pistol from the robbers.”

Content created and supplied by: Thrivewithola (via Opera News )