The Two Stories On Why It’s An Abomination To Kill A Monkey In Awka Town.

By Gist_Meel (self media writer) | 1 year ago

Awka is the capital city of Anambra State, Nigeria, the city was declared capital on 21st August 1991 after the creation of Anambra.

It’s a heinous crime to kill a monkey in, around or within Awka kingdom, while it might be permissible to kill it as a wild animal and can be used as bush meat once it’s not within, but outside the neighborhood of Awka, but never inside the town itself, and never would an Awka man agree to kill one even outside the town. The story is in two forms, I would discuss as I’ve learnt over the years, ofcourse no one else would tell the Awka tale better than Awka people, where only in case mine isn’t entirely true, then an Awka indigene should do better.

The tales, first monkies and the reverence that follows them.

Awka people were once said to been pursued from behind by enemies who were desperate to attack and murder them, as the story of old was told. While they neared Ugwuoba and towards Amansea axis, from nowhere, in what appeared to be seemingly miraculous, monkies came out in their numbers from the bushes and began to follow them, covering up their footpaths to mislead and confuse the enemies that were hunting Awka people. Those monkies followed directly behind Awka people who were running to avoid the attacks and that choice of those monkies to follow and cover their footpath brought about confusion on the enemies who eventually lost track of them. Awka people later settled in Awka town, where in appreciation and reverence for the role those monkies played towards their safety back in those days, it’s a big crime to attack or kill monkies in Awka. 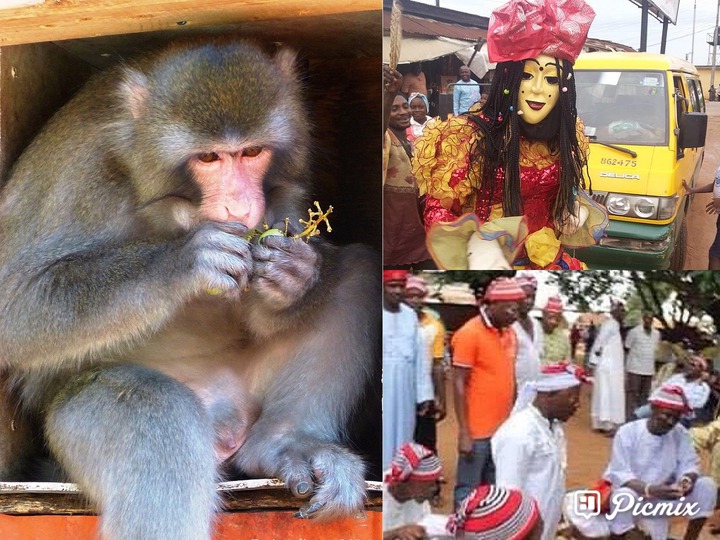 The second tale, the story surrounding the annual Imo Awka festivities. Awka people used to worship a god named “Okanube” with the elephant tusk called “Okike” as its symbol, which back in the years was very popular and powerful. Every family had theirs, and in the beginning of every farming year, it’s brought out from the “Obu”, it’s sacred sanctuary where it’s venerated and asked for provision for a successful farming year. It was said that anyone who saw it before those periods could run mad. When this deity somewhat declined in reverence that followed it, another supposed even more powerful god arose. This new even more powerful god is what is today referred to as the Imo Oka.

According to records available and from verbal history, a young girl named Nomeh fell ill, and Doctors were brought from the neighborhood, town next to Oka, Umuezeukwu to treat her. Sadly, Nomeh didn’t survive; and at her demise, in war, Oka wiped out that neighboring community, Umuezeukwu which doesn’t exists even till this day. Nomeh was buried where today the deity of the popular Imo Oka stands.

It was said that after a while, the dead began to terrify the people, where children died prematurely. The people decided that she was reacting and hunting them because she never got married nor had her own children as her life was cut short quite early. They then decided that it’s gonna be best to bring powerful medicine men in a desperate bid to appease the gods and calm her spirit.

Powerful Dibia(s) were said to be brought from Idoma or Igala Medicine men. When they arrived, they prepared a powerful charm which was then known as Akwali omumu umu Oka, charm for the procreation of Awka children, a charm which was said to be buried at her graveside.

In what became incredulous, as time and tide passed on, the charm became very active that Awka people returned to it and worshiped it as a deity and god, they named the god “Akwali omumu umu Oka” or simply put “Imo Oka”. The powerful medicine men who prepared that charm that brought about the god warned them never to kill a money and they were not allowed to return to their homes, for fear of a possibility of them producing same charm for other people, maybe Awka rivals in future or in times of war. They were given a place to settle, and that place is today known as Okpuno Awka.

Imo Oka is a powerful deity which commands respect atleast amongst Awka traditional idol worshippers, even the people of the younger generation take the deity seriously because of the enormous power it is claimed that it controls. Imo Oka, best known as egwu Imo Awka heralds or kicks-off the beginning of Awka native year. Incredibly, it remains the only pegan celebration that has survived ages and generations to this day.

Reactions as Pere’s fans from East-Africa surprised him with some get-well-soon gifts items.

5 Ways To Keep Your Romance Alive After Having Kids

2 Things Nigerian Army Did After A Man Escaped From A Kidnapper's Den, That Should Be Commended

Juju Or Fashion: The Myths Surrounding The Use Of Waist Beads

Causes Of Fall In The Standard Of Education In Nigeria