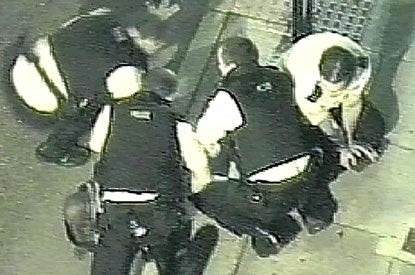 At first it looks untrue when a video footage emerged showing when a Nigerian man died after some Police officers in Britain knelt on the neck of this man, while trying to arrest him. But this video proves it to be absolutely true.

The CCTV footage of this incident was taken in Woolwich, South East London. In September to be precise. It Covered a moment when a Nigerian who is no more, identified as Frank Ogboru was involved in an altercation with Police Officers, who were invited by over to block of flats where he argued with the owner's girlfriend.

In discussion with the late Nigerian, the officers asked him not to return to house where he was staying, this urge from the Officer did not go down well with Mr Ogboru who insisted on going to his house, this led to a struggle and eventual arrest. The struggle escalated, off the camera, this made the officers to use CS gas to beat-off Mr Ogboru and tried to put handcuffs on him.

After this incident, members of the public gathered round the spot, with a couple of them covering the the event with their mobile phone. The CCTV footage shows two more officers coming to help others impede Mr Ogboru from standing, as he is still struggling.

Those who witnessed this incident stated that, this officers placed their kneels and feet on the late Nigerian, making the helpless Mr Ogboru 'wail like a dog' pleading he could not breathe. The Video footage showed one of the officers kneel over the Nigerian neck while his head hangs over the kerb.

Immediately the Police officers noticed that Mr Ogboru was dying he tried to stop him, but his attempt failed. The man eventually died, but the cause of his death was attributed to "asphyxia during restraint"

But the CPS, decided a jury will look into the event, and find out that the restraint was not unlawful, as there is no enough evidence against the officers, alleging them to have breached their duty of care.

Fourteen years after the death of the Nigerian, Mr Ogboru, the CPS is now taking proper scrutiny into the case, in a similar scenario with George Floyd, who was also killed after Officers kneed down on his neck, limiting his breath.

They have now launched a review case of police training after an inquest found last week that officers had ignored Frank Ogboru as he cried out 'i can't breathe, you're killing.