Meet The First Armed Robber In Nigeria To Be Publicly Executed

By Outside_Gist (self media writer) | 2 years ago

Hey fam, thanks for clicking, please before you continue reading, click on the follow up button above to see more exciting contents.

Armed robbery has always been an act that is not welcomed anywhere in the world, taking someone else property by force or even causing harm to people is wrong. Personally I frown against it but today I am going to show you the first armed robber in Nigeria and what happened to him.

During the 20th century, Nigeria was a country filled with less crime and more love and peace, from the stories my parents told me I knew that Nigeria then is far different from the Nigeria we know now.

If you were caught as a thief during that time you would either be flogged or taken to your father's house to make you feel ashamed. Moreover people never did acts that could shake the citizens of Nigeria until the 1970s, when Oyenusi Ishola made the citizens of Lagos and it neighboring cities tremble. 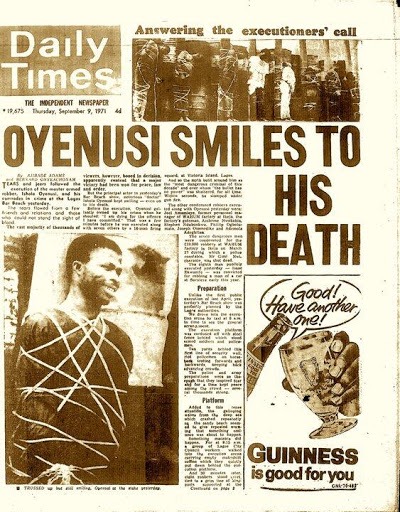 Oyenusi Ishola born in the 50s was a notorious armed robber who was a Yoruba man from Osun state. He was popularly known as ' doctor rob and kill ' in the 70s who terrorized the people of Lagos and other neighboring cities.

He was no ordinary thief but a man who sent chipls down the spine of Nigerians during his reign as the most violent armed robber. Oyenusi started robbing by snatching a car whose owner died in the process for his girlfriend, he was often described as a man who was romantic and hot tempered. Ishola bragged that the bullet has no power over him but he forgot that those who live by the sword will surely die by it and met his end sooner than he expected.

During the administration of Yakubu Gowon, he approved the public execution of armed robber in Nigeria because it was becoming unbearable. Ishola Oyenusi was finally caught was finally caught by the Nigerian police when he was organizing a robbery. On the 8th of September 1971, he was publicly executed with six of his gang members after ratting them out after saying he won't die alone at the famous Lagos bar beach. About 33,000 Nigerians were present on his execution day and many were excited that the famous robber was finally captured. Ishola Oyenusi confessed that his parents were not capable of sending him to secondary school that was why he turned to robbery few minutes to his execution, he was smiling at his last moment while saying the word I am dying for the offences I have committed.

Oyenusi is often described as the first celebrated armed robber in Nigeria.

Armed robbery is and will never be a good act, it is not good in the sight of God. I hope you enjoyed it.

Please don't forget to like, share and comment. Let me know your thoughts on this, have you heard the story before or did your elders ever talked about him, I am curious to know. Thanks

Content created and supplied by: Outside_Gist (via Opera News )