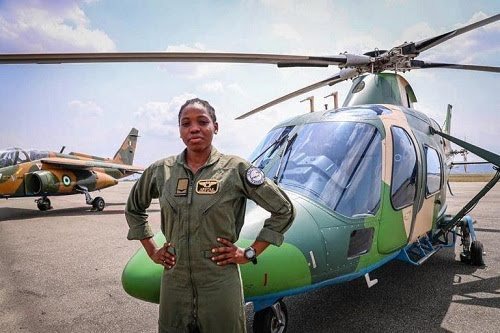 The Nigerian Air Force (NAF) has announced that it had handed over the alleged murderers of flight officer Tolulope Arotile, the first female attack helicopter pilot, to the Nigerian police to complete the investigation and initiate law enforcement.

NAF said that the clarification, based on the report, should stop all conspiracy theories, innuendo, suspicions, and misguided statements on social media regarding her death.

Air Commodore Daramola said, due to the particular circumstances of the incident that resulted in her death, "a rash of falsehoods, innuendo, conspiracy theories, and the like has been spreading in public places, especially on social media.

According to him, "the late flight officer Tolulope Arotile, a squadron pilot from the 405 Helicopter Combat Training Group (405 HCTG), Enugu, who was attached to the air component of Operation Gama Aiki in Minna and recently completed her promotional tests, was in Kaduna waiting for her deployment their next assignment..

“During this time she stayed with her sister, Ms. Damilola Adegboye, in the Sabo area in Kaduna and visited the NAF base if necessary.

On July 14, 2020, around 10:55 a.m., the late flight officer Arotile received a call from her colleague, flight officer Perry Karimo, a 405 HCTG helicopter pilot, who wanted to discuss the arrangements for her return to Enugu. Please come to the base so that they can work out the modalities.

“Around 10:58 in the morning, the late Arotile called squadron Diepiriye Batubo, the Group Operations Officer (GOO) of 405 HCTG, who was in Minna at the time, to clarify questions about their deployment.

“It must be emphasized that the call from Flying Officer Karimo and the call to Squadron Leader Batubo were both before 11:00 am, more than 5 hours before the incident that resulted in her death.

 "The flying officer Arotile was later taken by her sister, Ms. Adegboye, from Sabo to the NAF base in Kaduna, where the deceased dropped her phone because she had charged in a house in squadron pilot's quarter of squadron leader Alfa Ekele.

“Her older sister later brought her to Mammy Market around 4:00 p.m., where she photocopied and laminated some of the documents.

"It is noteworthy that Messrs. Adejoh, Folorunsho and Gbayegun are civilians who live outside of the NAF base Kaduna, but were on their way to visit a woman Chioma Ugwu, the squadron leader Chukwuemeka Ugwu, who lived in Ekagbo- Quarter based lives.

“When Arotile recognized her schoolmate Arotile, he turned the vehicle after driving past her, supposedly to quickly meet the deceased who was going in the opposite direction.

“The vehicle hit Flying Officer Arotile from behind, knocked her down with considerable force and hit her head on the sidewalk.

“The vehicle then drove over parts of her body when it turned off the road behind the curb onto the sidewalk and caused further injuries.

“Flight officer Arotile was then brought to 461 NAF Hospital Kaduna for treatment, while Mr. Folorunsho (one of the passengers in the vehicle), who is also an accident and emergency nurse at St. Gerard Catholic Hospital in Kaduna, provided first aid.

“The trio of Messrs Nehemiah Adejoh, Igbekele Folorunsho and Festus Gbayegun were immediately arrested at the Air Provost Wing, 453 Base Services Group, Kaduna, when the investigation began.

“They were subjected to toxicological tests at the 461 NAF Hospital, but no traces of alcohol or psychotropic substances were found in their systems. However, it was found that the driver of the vehicle, Mr. Nehemiah Adejo, did not have a valid driver's license.

Air Commodore Daramola said, after carefully reviewing the above, the preliminary investigation concluded that:

“Flying Officer Arotile's death was caused by a blunt head trauma and significant bleeding from the impact of the vehicle.

"As it is a civil lawsuit, the matter will be turned over to the Nigerian police to further investigate and bring the suspects to justice under applicable law.

"The Nigerian Air Force, a highly professional and disciplined organization, will not share with individuals or groups the false allegations of" foul play "made in some areas.

“Suffice it to say that Flying Officer Arotile was a pride of the NAF, in which the service had invested heavily in resources, time and energy.

“As a result, it is ridiculous for anyone to even remotely indicate malicious service intentions against one of their most valuable assets.

“In addition, it is extremely sad and discouraging that, instead of allowing the Arotile family and the Nigerian Air Force to mourn peacefully for our dying Tolulope, many have decided to politicize their death, while others are using the incident to prove unfounded to push. misguided ethnic and religious agenda.

"It is extremely important that the memory of this fallen hero and our precious child is not affected by the spread of misguided feelings and wild gadgets."

What can we say about this, kindly drop your comments and don't forget to stay updated by hitting the follow button for more news.

Content created and supplied by: Joash1 (via Opera News )