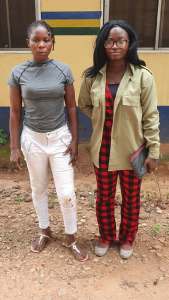 On Wednesday, Ogun State Police Command personnel shot a kidnapping suspect on the Shagamu-Ijebu Ode road and rescued two of their victims.

The commander's PR officer, DSP Abimbola Oyeyemi, revealed this in a statement to reporters in Abeokuta, the capital of Ogun state.

Oyeyemi said: "The accident occurred when Shagamu DPO, SP Okiki Agunbiade, was on a routine patrol with his men and saw the registration number MUS 86 FN with several passengers in Siena, who looked suspiciously attracting police attention, which made them to halt the vehicle.

"Instead of stopping, the driver zoomed of towards Ijebu-Ode, which warranted the DPO to engage his men in a hot pursuit with them.

"After realizing that they were being chased, the people in the car started shooting at the police on the road, and the police retaliated.

"They then jumped, left the car and crashed into the bush, the police chased them into the bushe and shot one of them while the others ran away with gunshot wounds.

"Those who were rescued from the abandoned car were members of the National Youth Corps, identified as Okoroji Agnes and Tawa Sosanwo posted to the Federal College for Girls, Sagamu."

Oyeyemi said that "the two victims said they were abducted in various places by kidnapper who took them to an unknown destination before police arrested them on the road.

"Their vehicle was restored with the following elements: a black toy gun, a gold watch, a Samsung Galaxy S7 phone, knife and a black watch." Police commissioner Kenneth Ebrimson, who praised the brave behavior of his people, appealed to the public, especially hospitals, to notify the police when someone was seen near them with gunshot wounds.

He also assured the public that fleeing gang members would be hunted down and captured as soon as possible.