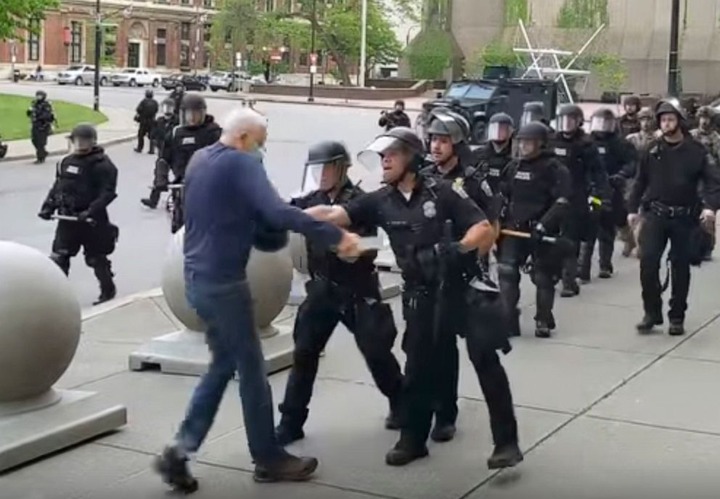 57 members of the Buffalo Police Department have resigned from the Emergency Response Team, but remain on the force, according to an official from their union.

John Evans, president of the Buffalo Police Benevolent Association, said the move was meant to protest the suspensions of two officers involved in the caught-on-video shove of an older man at a protest.

The 75-year-old protester was seen shoved by police to the ground and bleeding from his head in a now-viral video.

"Last night, after seeing the video of the incident occurring in front of City Hall, I was concerned and immediately contacted both BPD Commissioner Lockwood and FBI Acting SAC Guyton. The officers involved have been suspended pending further investigation," Kennedy said. "On behalf of the entire law enforcement community, I offer our sincere best wishes to the injured gentleman, as we hope and pray for his speedy and complete recovery."

Earlier Friday, the Erie County District Attorney's office confirmed they were investigating the incident, and said the man seen in the video bleeding from his ear was being treated for a head injury at the Erie County Medical Center.

Erie County Executive Mark C. Poloncarz said he had not heard about the 57 officers resigning from the Emergency Response Team at a press conference Friday afternoon. He added, however, that if they resigned that indicates to him that the officers didn't see anything wrong with actions taken last night.

Content created and supplied by: Papiz1 (via Opera News )