Say No To Jungle Justice, Angry Mob Kill A Car Snatcher Who Tried Stealing An SUV In Delta State

An angry mob has allegedly kill a car snatcher after a failed attempt to steal an SUV belonging to one Mr Atarhe in Aroh Road, Ughelli, Delta State.

It was gathered that, the robber belongs to a two gang syndicate known for snatching cars around the area.

They followed the driver of the SUV and ordered him out of the car when he stopped to greet a friend, however Mr Atarhe quickly sped off which prompted the robbers to shoot him, he however reported to the nearest police station.

Subsequently, residents mobilised themselves and chased after the robbers, apprehending one during the process, before the the police team arrived the scene, the robber have already been mobbed to death, a locally made pistol and live bullet was found on him while his partner escaped.

However, DSP Onome Onovwakpoyega, who is the Delta State Police Public Relations Officer, promised to give update on the incident immediately the DPO of the area contact him. 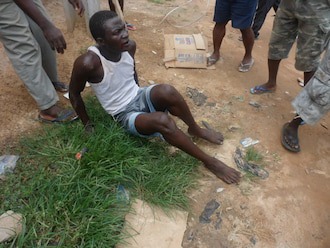